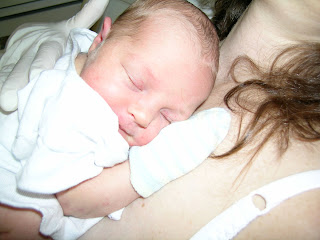 So now that I’ve completely bummed you out... let’s talk about something else. Like my son Bill. He’s awesome! And now that you know what my body’s been through, you know what a miracle he is.
Today while he was eating his bread and butter breakfast, he told me, “when people say certain words I get a picture in my mind. Like if you say, ‘carrot,’ I see a baby carrot on an orange background. And if you say, ‘rain forest’ I see Wonderwoman flying over a rainforest. When I hear the word ‘soul,’ I see a sword with blue light shooting out of it in front of a blue background’ When he says stuff like this, I am ashamed of all the times I’ve told him to be quiet so I can concentrate on what I am doing.
Since he goes to Catholic school and Sunday school, he has already wrestled with some real theological issues, and has valid questions that, frankly, I can’t answer, like “if people are chosen, don’t they have a say?” At the same time, he has asked funny questions like, “Mommy were you alive when Jesus was alive?” That was a while back, I think he has a firmer grasp now of the timeline of history...
One time I told him that “Daddy has a tender heart, so you need to try not to hurt his feelings.” I actually forgot about telling him this, then several months later, he told me in confidence, “I always sit with Daddy at restaurants because he has a tender heart. You KNOW I love you, but I want to make sure Daddy knows too.” My own tender heart melted at this! Of course later, Grace told him that he should be nice to his mommy because she had tender feelings and he had a meltdown and yelled, “No! Daddy has a tender heart!” I guess he couldn’t handle tiptoeing around more than one adult at a time! I had to laugh.
He has a brilliant imagination – he writes and illustrates books and makes up stories to help himself get to sleep. He loves to wear costumes - if you come to our house, you are likely to meet up with a knight, a Roman soldier, Luke Skywalker, an astronaught, the Flash, Spiderman... He loves babies and kittens, but is a boy through and through. He plays army and knights and loves a water fight, a nerf sword fight or a good bout of wrestling. ‘Cos that’s what little boys are made of, right?
Given all the wonderful and clearly sensitive things that he says, it sometimes takes me by surprise when he does the stuff a kid his age would normally do... I remember being a kid, and thinking stuff like, “What would happen if I... [insert crazy dangerous activity here]...” Or when he follows kids who are clearly, well, jerks... I guess since he’s that articulate, it’s hard to believe that he’s still just a little kid. He still needs guidance and hugs and pretty much constant parental supervision.
When Tom and I were married, we said that we wouldn’t have any kids... I never wanted kids because I didn’t want to pass on my tendency toward fear, self-loathing, and obsessiveness. This was not unreasonable, since we were not terribly young. But, after sitting next to people with babies at church, my heart started to soften and we decided to try. One month later, I was carrying a zygote.
The zygote grew into the amazing Bill, and I have loved him ever since.
Posted by julie moore at 10:22 AM