Greetings from my lockdown house!

So, just for kicks, I was scrolling through my blog - or I guess I should say, my OLD blog since I haven’t posted anything since JULY 26, 2019!!! What’s that about? Especially since I’ve had a buttload of time during the pandemic to write.

But did I use the gift of time to share my faith and other musings in written form? No. You know how I spent the days that stretched out before me this past year? Well, I pursued a number of useful and useless endeavors:

BUT… why, oh why, didn’t I write? Wasn’t there stuff to say? You bet there was! What with the awful pandemic, forced self-isolation, an election fraught with controversy, increasing racial tensions, a crazy insurrection… Did I have an opinion on any of this? You bet I did! Why didn’t I write about it?

I guess I was… well… I think the term is “listless”…

(of a person or their manner) lacking energy or enthusiasm.

Yes, I think that’s the word. Although I do have plenty of lists believe you me! To-do lists, to-cook lists, to-clean lists, to-read lists, grocery lists, shopping lists, Christmas lists, top-ten lists… You name it, I have a list. What I didn’t have was energy or enthusiasm, as specified in the definition above.

But I was thinking about writing. Non-stop. And what I mostly wanted to tell y'all... is how even when we feel like things are falling apart around us, God is still the King of the Universe who will, in time, make everything all right.

And I know that’s easy for me to say… all things considered I’ve had a pretty easy time of it. My sister posted one of those memes about "which lockdown house would you choose?" and after considering my options, I had to admit that my house was just as good as most of those. I mean, sure we don’t have a private beach or a hot tub, but our backyard is pretty spacious, and we do have plenty of pizza and beer and snacks and chocolate and coffee and books and Netflix and what have you… 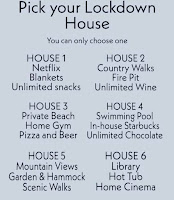 Anyhoo, what I mean to say is that I guess it’s easy for me to make the assertion that everything’s gonna be all right… But it’s really there in the Bible. And it doesn’t refer to just steady employment, no more COVID or a president we can get on board with. Because these things… and the things in your lockdown house - the pizza and beer and such… they're not going to get very far in filling that God-shaped hole in your soul that Blaise Pascal talked about so eloquently? But that’s what the Bible’s is all about… Filling that gaping hole. Dig these words from Revelation 21:

Then I saw “a new heaven and a new earth,” for the first heaven and the first earth had passed away, and there was no longer any sea. I saw the Holy City, the new Jerusalem, coming down out of heaven from God, prepared as a bride beautifully dressed for her husband. And I heard a loud voice from the throne saying, “Look! God’s dwelling place is now among the people, and he will dwell with them. They will be his people, and God himself will be with them and be their God. ‘He will wipe every tear from their eyes. There will be no more death or mourning or crying or pain, for the old order of things has passed away.”

He who was seated on the throne said, “I am making everything new!” Then he said, “Write this down, for these words are trustworthy and true.”

He said to me: “It is done. I am the Alpha and the Omega, the Beginning and the End. To the thirsty I will give water without cost from the spring of the water of life.

Thing is, y’all, I believe that this refers to real, physical events that are actually going to occur. AND ALSO this real, happening thing will ACTUALLY fill the gaping hole! I don’t know the particulars beyond what's written above*, but I do believe it’s a real thing that’s 100% going to happen!**

And not that I hate life or anything… in fact my life is pretty sweet… I live in an awesome lock-down house! That said, regarding the end of the world as we know it, Lenny Bruce is not afraid, and neither am I!

**I guess that might sound like a crazy assertion, but when you're one of those crazy Christians, it comes with the territory!