Oh, the depth of the riches! 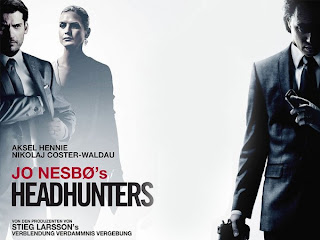 I’ve said before how my husband is all hip to the latest movies because he loves to read the New York Times... well, the most recent film I was treated to was a crazy Norwegian number called Headhunters. Now, normally, I tend to drift off into an upright doze when faced with subtitles after nine in the evening, but this one held my attention like a slow-motion car crash.

It’s about Roger Brown – a short but handsome guy who steals art. Normally, I don’t notice if a guy is short or tall, because to me, everyone is tall... but in this case, the guy’s Napoleanic complex is pretty much his driving force. Because everything he does is to ensure the love of his supermodel-looking wife. He has a fine job as a recruiter – or “headhunter” – but nothing that would earn enough to purchase the gorgeous modern sculpture of a house they live in, or the walk-in closet full of designer clothing his wife has.

Anyway, in his interviews with job-hunting executives, he ascertains whether they have any art worth stealing, then while they are at their second interview, he goes in an replaces it with a fake. So... when the evil-handsome guy who plays Jaime Lannister in Game of Thrones plays him, then turns into an ex-army psycho killer, naturally hilarity ensues. I mean, it’s gross and violent and suspenseful and... honestly, very funny...

It was a great ride for a viewer with a fairly strong stomach, but what really stuck out in my mind was when, toward the end, Roger’s wife finds out about his other life as an art thief. Her reaction was something like, “You did this to buy me stuff? You think I need stuff? Is that what you think of me?”

It made me wonder whether we project our own insecurities onto our idea of who God is... and how He feels about it. And the answer is, of course, YES. We definitely do that. If we grew up in a strict or blaming home, we imagine that God is constantly judging us. Not that I would know anything about that... Although, I will say, that even when I was very thin, I still lived as though I were the insecure fat girl of my very young youth... the one who had to purchase people’s good will by being extra good, or extra good at it.

It was the very grace of the very God that when on the precepice of life and death, instead of continuing on the path of, “God is just like my Dad, my boyfriend, etc...” I chose instead to contrast the way of humans with the ways of God, and embrace Him rather than reject Him.

Or if our parents are distant or missing, maybe we see God that way... Like He’s up there just doing His God thing and we are completely on our own. Or worse, we could feel like we are just a little flea circus down here hopping around for His entertainment.

Another way we might misunderstand, is by projecting our own pet causes onto God... like all the different “theologies” – liberation theology, feminist theology, social theology... Of course God cares immensely about the liberation of oppressed peoples and the betterment of the world, but ... well, unless I am completely misunderstanding Him – which is not beyond possibility – God’s big concern is freeing us from sin and death rather than from human and societal oppressors. I mean, at one point Jesus says “Do not be afraid of those who kill the body and after that can do no more. But... fear him who, after your body has been killed, has authority to throw you into hell.” (Luke 12)

Moving right along, my point is this: Our understanding of God is limited – by our insecurities and also our concerns – and also our tiny pea-brains.  I guess I’m not telling you anything new. And, as with politics, sometimes we act as though our view of things is the definitive vew. And even though I am here telling you stuff, I'm going to try to be somewhat humble about what I am saying here. God is infinite, and I can’t begin to grasp or encapsulate how God thinks or feels... It's just not something anyone can know.

A prime illustration of someone who just didn't understand God is Job. This guy's afflicted with all kinds of afflictions, and he's like, “What the hell?” Of course he comes right out and freely admits that he doesn’t understand what God is up to. He wants to get up in God’s grill and confront Him. But God... well, it doesn’t attribute any emotion or tone to God’s words, but they sound pretty indignant to me. He’s all, “You don’t understand Me and you’re pretty arrogant to think I owe you any answers.” I guess God was indignant about Job’s attitude... his “What the hell?, I don’t deserve this,” kind of swagger.

In general, though, the Bible portrays a God who knows that we will misunderstand Him – but with more grace. Isaiah 55, says, “For my thoughts are not your thoughts, neither are your ways my ways,” declares the Lord. “As the heavens are higher than the earth, so are my ways higher than your ways and my thoughts than your thoughts.” Lucky for us, this passage refers to why He forgives people who turn to Him. I mean, sure His all-knowing, all-seeing-ness gives Him a good view of our crumminess, but that’s not what He’s looking for. He’s looking to show us the grace that He is made of.

Paul also knew God’s mind is way too beautiful for us... and he loved it: “Oh, the depth of the riches of the wisdom and knowledge of God! How unsearchable his judgments, and his paths beyond tracing out! Who has known the mind of the Lord? Or who has been his counselor? Who has ever given to God, that God should repay them? For from him and through him and for him are all things. To him be the glory forever! Amen.” (Romans 11) Paul knew he didn't know much but he did understand the grace of God and His interest in reconciliation and unity better than most.

But even though it's a given that we just can't stretch our minds to comprehend Him, it seems that our failure to “get Him” kind of frustrates Him sometimes. We see this a lot with Jesus. He’s always saying stuff like, “Oh ye of little faith,” and “How long shall I put up with you?” Of course in Jesus’ case, He was standing right in front of them, healing people, feeding the 5,000, raising folks from the dead... So, I’m thinking His frustration might be warranted. I always think about Pilate looking Him right in the face and saying, “What is truth?”

That said... Jesus DID talk in parables so it wouldn’t be completely easy for some people: “This is why I speak to them in parables: ‘Though seeing, they do not see; though hearing, they do not hear or understand.’ ” I always felt kind of sorry for the Pharisees... like they were set up. They were kept from seeing the truth, but were then blamed for it. It is made clear, though, that it was their own arrogance that hardened their hearts to who Jesus was. Is. Nonetheless, I still feel for those guys.

And the LAST thing I have to say: Apparently the Holy Spirit can give us a leg up in this department. In the Old Testament, people got glimpses into God's massive brain by reading Scripture. The author of Psalm 119 says, "Your word is a lamp to my feet and a light for my path.” It's still a good way to learn, but the New Testament church received a much fuller understanding through the Holy Spirit. Jesus tells his friends, “But the Advocate, the Holy Spirit, whom the Father will send in my name, will teach you all things and will remind you of everything I have said to you.” So we’ve got that going for us. Which is nice.*

Other evidence of this in the Bible: “What no eye has seen, what no ear has heard, and what no human mind has conceived the things God has prepared for those who love him— these are the things God has revealed to us by his Spirit.” And, “The Spirit searches all things, even the deep things of God. For who knows a person’s thoughts except their own spirit within them? In the same way no one knows the thoughts of God except the Spirit of God. What we have received is not the spirit of the world, but the Spirit who is from God, so that we may understand what God has freely given us.” (1 Corinthians 2)

Paul also prays the following for his friends in church: “We continually ask God to fill you with the knowledge of his will through all the wisdom and understanding that the Spirit gives.” The Catholics believe that the saints are in heaven praying for us now. If that is the case, I hope Paul is up there praying this for me now!

No, wait – THIS is the last thing I’m going to say: It looks like to me that knowing God’s mind, having the mind of Christ... is not about giving us extra tools to condemn people or ourselves with. It’s about sharing His love and grace. About unity. For instance, Paul signs off on one of his letters with this: “May the God who gives endurance and encouragement give you the same attitude of mind toward each other that Christ Jesus had, so that with one mind and one voice you may glorify the God and Father of our Lord Jesus Christ. Accept one another, then, just as Christ accepted you, in order to bring praise to God.” (Romans 15)

So... I’ve led us far, far away from the movie Headhunters, and I've thrown a lot of verses at you. If you weren’t able to slog it all, here’s my synopsis:

1 - Set up about movie Headhunters
2 - Observations about how we misunderstand God
3 - Answers that I have gleaned from the Bible
a. God’s mind is much deeper and wider than anything we can understand
b. He knows we can’t understand Him
c. It's frustrating to Him sometimes.
d. Scripture and The Holy Spirit can educate us regarding the heart and mind and God
e. Knowing God’s mind is not for condemnation and division, but for acceptance and unity

Yes, there was actually a structure and unity to this ramble... It's like that tired, but meaningful old comparison of life as a tapestry. We look at our lives and see a big puzzling mess... but what we are looking at is the back of the tapestry woven by God Himself – with the threads all zig-zagging and hanging down and tied off. But if we could see what God sees, we would see the gorgeous, precisely-designed front of a masterpiece of beauty and artistry... the fabric of love and grace our world, our lives and our faith is made of.
Posted by julie moore at 9:33 AM