Leaning on the Invisible Arms

The other day I was taking Bill to a birthday party at an unfamiliar location and as we drove around looking for the exact spot, Bill kept up a running monologue of doubt and fear: “What if we made a wrong turn? I don’t see any cars – maybe it’s the wrong day! What if we passed it? Maybe this isn’t the right street! What if we never find it? What if we’re late? Mom, you should call Alexander's mom.”

Forget that I had GPS on my phone… forget that being late to a birthday party, taking a wrong turn, etc., are absolutely no big deal… he was panicking. He likes to rest in the knowledge the grownups that care for him are in control and know what they’re doing. Unfortunately for him, I happen to be one of those grownups, and I most assuredly do NOT know what is going on MOST of the time! Especially when it comes to parenting.


What I actually said at that moment was this: “Bill, trust me.” I don’t know where it came from – God, maybe? Of course Bill was full of “but Mom”s. But I was determined that I had hit the exact right vein. I just kept repeating at intervals, “Trust me, honey.” Of course it turned out that we WERE on the right road, it was just farther down than we expected, and we made it to the party with minutes to spare. (And by the way, the place they had the party – a huge warehouse with wall-to-wall trampolines – GENIUS!!)

Anyway, a couple of days later, I happened to read a column by an actual child-raising advice giver, John Rosemond. I’ve heard him called a kook, but anytime I have tried any of his advice it has worked beautifully, so… kook or not, I tend to give some of his views credence. Anyway, in this column Rosemond reiterated his oft-given advice – his recommendation of gratuitous use of the phrase, “Because I said so.”

Rosemond is a firm believer in a kid respecting the absolute authority of his or her parent, so “BISS” is a perfect catch-all response to whining, protesting kids. I personally don’t use it that often, but I’m not afraid to use it. Sometimes it’s the real answer. Rosemond suggests that it is shorthand for, “Because I am an adult and you are my child and it is my responsibility to make decisions of this sort on your behalf and you will not understand my actual reason until you are my age and have a child your age, so there’s no point in my sharing it with you, and whether you agree or not, you have to obey.”

In this recent article, though, he goes on to say, “I have discovered an alternative that is even shorter and, therefore sweeter: ‘Trust me.’” He argues that when I decide something for my kid that is in his best interest, nothing I say will make him agree with me, so I just have to ask him to trust me. He may not understand that request, and he may not be able to do it, but … it’s really all we’ve got… this relationship and its predetermined roles.

Of course, as the trust-ee in this relationship, all this is easy for me to say. You see, this is only the intro to this particular piece… a way to get to this part:

You see, I am a freelance graphic designer, as my moniker says above, and freelance means that I have to drum up my own work. Consequently, the amount of work, and therefore money, I have coming in varies from month to month. My favorite thing is a steady client for whom I produce a certain amount on a regular basis… like a direct mail client or magazine that has a monthly printing, or a marketing firm with a constant need for print materials for various clients.

Even this, however, does not guarantee a consistent income. There are still slow and therefore poor periods. And I’m in one now… with bills due, summer camp fees to pay and high quarterly taxes – because last year was pretty flush. Needless to say I worry about this. A lot. I wrack my brains trying to think of ways to earn extra cash, to make the cash I have go farther, to cut and trim our budget…

And while I was stewing over this ad nauseum the other day – as is my way, I had this overwhelming sense that God was saying to me, “Trust Me.” Oooopsss… And I didn't say it out loud, or even in my mind, but my basic response to this was an attitude that implied, “Do I HAVE to? Must I go through an unsettled, scary time? Can’t I just have the money? And of course it WOULD be easier to just have the money than to have to trust an invisible Being. But I’m thinking that’s not what I’m called to do right now.

No, I’m going to have to “put my money where my mouth is.” That is to say, I talk about God a lot, and my confidence that He and His promises are real, but when it comes to actually having to lean on Him and His promises… well, am I any good at it?

No, not really. Hence all my fretting and scheming. Which, according to Jesus is a huge waste of time:


Therefore I tell you, do not worry about your life, what you will eat; or about your body, what you will wear. For life is more than food, and the body more than clothes. Consider the ravens: They do not sow or reap, they have no storeroom or barn; yet God feeds them. And how much more valuable you are than birds! Who of you by worrying can add a single hour to your life [or a single cubit to his height]? Since you cannot do this very little thing, why do you worry about the rest?

“Consider how the wild flowers grow. They do not labor or spin. Yet I tell you, not even Solomon in all his splendor was dressed like one of these. If that is how God clothes the grass of the field, which is here today, and tomorrow is thrown into the fire, how much more will he clothe you—you of little faith! And do not set your heart on what you will eat or drink; do not worry about it. For the pagan world runs after all such things, and your Father knows that you need them. But seek his kingdom, and these things will be given to you as well.

Sad to say, the Sermon on the Mount is just about the last thing I am thinking about. No, instead I am praying for a windfall and planning how I would spend it. Nice. (Home repairs, cars to replace our aging relics, school tuition…) Lame, I know.

You know that song Leaning on the Everlasting Arms? It’s a great song, but you have to lean on those eternal arms before you can see them. And sometimes you don’t even see them until later, in retrospect like that gooey Footprints poem. And that’s uncomfortable – stepping out into to what looks like nothing. Ha! They should call it Leaning on the Invisible Arms! 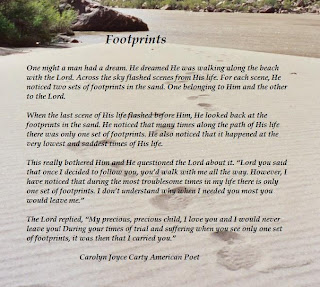 It’s like that old trust game where one person falls back and the other people catch them. You have to actually allow yourself to fall before they will catch you. Of course on the sitcoms the people are standing around talking or arguing and don’t notice the protagonist is falling until it’s too late. In this case, though, God will always catch you. Maybe I just have to believe that the bottom of whatever I am falling into – that is, the grace of God – is the metaphorical equivalent of wall-to-wall trampolines...!

Of course, none of this is to say that God guarantees prosperity. That’s something I have to relax into as well. Knowing that the absence of money does not indicate the absence of God. In my case it’s usually the opposite. My prayer life is rich and juicy during times like these. So, basically, I’m going to have to put my whole self into trusting that He knows what He’s doing, and that His Grace and friendship are sufficient.