Break the code of the whispering chimneys and traffic signs...

Okay, so we have this new Amazon speaker thing you can talk to. It’s called an Echo, and you can tell it what songs to play, or that you want a weather report or a news briefing. It has its uses – I mean, I love having a speaker in the kitchen, but, well – it’s not as versatile as Siri, and it really has a hard time figuring out what the user is saying. Honestly, we might as well ALL be Scottish!

Anyway, there are several ways to listen to tunes on this device – you can bluetooth it to your iPhone, or ask it to play something from iHeartRadio or a station from TuneIn. Or you can ask it to play something from your iTunes library, which in our case, is Tom’s iTune’s library – which is stunningly vast. You’d think with all this choice I’d be in heaven, but I often have a hard time deciding what to tell “Alexa” to play. If she could understand me, that is. 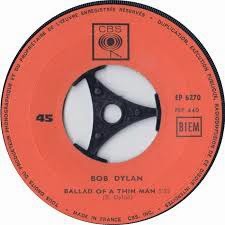 Which brings us around to this: Now that I’ve been requesting songs from Tom’s library to play while I’m cooking, Bill has a new favorite song… Ballad of a Thin Man by Bob Dylan.

You can listen to it by clicking on the song title above, and you can read the lyrics here. Anyway, Bill’s favorite part goes as follows: Now you see this one-eyed midget / Shouting the word “NOW” / And you say, “For what reason?” / And he says, “How?” / And you say, “What does this mean?” / And he screams back, “You’re a cow / Give me some milk / Or else go home.”

He just loves that – it cracks him up every time. Then he sings the chorus out loud: “Because something is happening here / But you don’t know what it is / Do you, Mister Jones?”

It’s so funny and wonderful to watch him listen to that song and feel just like I did when I first heard it… like “Bob Dylan is hilarious!!” And I’ve heard that song a bunch of times but this is honestly the first time I really stopped to think about what it means.

And while I can’t say for sure what goes on in the mind of a brilliant guy like Bob, here’s my best guess… I think it’s about a traditional guy in the sixties - a “suit” if you will… who sees all the counterculture going on around him and hears the associated music – specifically Bob’s far-out lyrics – and just can’t understand what it’s all about. The song is sort of a hipster anthem – it's someone in the in-crowd being snarky about those who aren’t. And I find it doubly hilarious that Bob would use an incomprehensible spew of words and images to tell the story of someone who doesn't understand something.

And though it’s a whole different thing, it reminds me of … well, of this friend I used to have… She's passed now and I miss her terribly, but when she was around, we spent hours on end talking about the validity of Christianity… and not by my choice! I mean, I love the topic, but arguing does me in. ‘Cos I want everybody to like me and be nice to me, see? Nonetheless, she LOVED getting into it and considered it time very well spent.

She knew my conversion story – the one where I told God to leave me alone but He wouldn’t (you can read about it here), and she'd frequently protest the injustice – that it was so “easy” for me to “get it” but so opaque to her. And, honestly, this has has always puzzled me as well. In fact, there are places in the Bible where it says that God has deliberately hardened people’s hearts or kept them in the dark, and this confuses me.

For instance... In what people call "the parable of the sower,” Jesus uses a cryptic story to say that some people won't pick up what He's laying down – just like Bob uses a blast of incomprehensible logorrhea* to say, "Mr. Jones will never understand me." The famous story explores what happens when a farmer plants seed in different types of soil. Jesus's disciples ask him what it means. and He says,

“The secret of the kingdom of God has been given to you. But to those on the outside everything is said in parables so that,  “‘they may be ever seeing but never perceiving, and ever hearing but never understanding; otherwise they might turn and be forgiven!’” (Mark 4)

And then in 1 Corinthians, Paul says: “The person without the Spirit does not accept the things that come from the Spirit of God but considers them foolishness, and cannot understand them because they are discerned only through the Spirit.”

As a natural evangelist, these passages concern me. I mean, if this is how it is, how can anyone be saved? How was I saved? Is this the answer to the old “free will v. determination” debate? I mean, did I “get it” because I was predestined to do so?”

Well, much to my surprise, our preacher was able to help me work through the difficult passage above  in a recent sermon… for now anyway!! I say “to my surprise” because often I find that having something explained to me does not necessarily make it any less difficult to understand.

Anyway, if I understood the pastor's explanation correctly, people “get it” because they WANT to “get it.” And I don’t mean to say they talk themselves into it… more like, in order to understand or accept it, a person should be open and willing to entertain the notion that it might be true and important and worth pursuing for life.

I recently saw an episode of The Simpsons where Homer asks Ned Flanders what the key to his happiness is, but before Ned can answer, Homer says forcefully, “and DON’T SAY JESUS!!” Which, in real life, is bit like the way the friend I mentioned earlier approached our conversations.

She was intensely interested in auras and ghost sightings and stories of people who had died on the operating table and come back to life. But she eagerly soaked them up because she was eager to prove that Christianity was wrong... rather than to learn more about the God we worship. Whereas, in my case, I already accepted Christianity as the truth – my dilemma was that I just didn’t want to be involved with it in any deep way, but I knew that God wanted me to.

I remember once on the 4-hour drive to her house I heard a song by XTC called Rook, (listen to it here) in which the singer begs the rook/crow to reveal secret truths to him of “plans eternal.” I thought, “Why would you ask a black bird for eternal truths?” And I recognized that while my friend felt she was digging hard for the truth, there was a soft, sweet-smelling garden with a big sign over it that said "Truth" that she was refusing to dig – mostly, I think, because she wasn't thrilled about the other gardeners. And I know that our generation has a super relativistic idea of “truth,” but, well… what do you expect from a blog that says “Christian” at the top?!

I don’t know what this means for ME, the evangelist… because while it makes sense to me and echoes my experience, I know that not every person I meet is the same, and this may not apply to every single conversion (or non-conversion) story. It may be more of a general concept rather than specific to every person. I can’t possibly begin to analyze what’s going on with anyone… what their history has been, what their temperament is or their issues are, how many Christian a-holes they have met…

And rest assured, I’m not sitting around plotting your conversion… I'm more about doing what I would do anyway – that is, lavishing you with love and friendship... you know – getting your dirt all watered and fluffed and ready. I mean, I sow seeds wherever I go – just as a matter of speaking my mind… but as in the parable of the soils referenced above in Mark 4, seed that takes and grows needs good, rich, deep soil.