Growing up in Crazytown

One day this week I read Genesis 38 and... well, I’m just gonna say... crazy, man. I mean, why is this even in the Bible? Some preachers preach through a book of the Bible, some preacher spend several weeks in a row preaching about one certain topic like, say, discipleship... or suffering. Some preachers, however, use the lectionary, which is listing that contains a collection of scripture readings appointed for Christian or Judaic worship on a given day or occasion. It goes through the whole Bible over time, not leaving anything out. A preacher I know uses it because otherwise she would be tempted to leave out kind of dicey passages like this one.

I mean it just seems wrong on so many levels... Judah leaves his family and  marries a Canaanite woman, with whom he has 3 sons. The first one is so wicked GOD kills him. According to their laws, the second son, Onan, was supposed to produce children with the first son’s wife, but refuses. (Trivia fact: that’s why the birth control method known as withdrawal is also called “onansim.”) So God kills him too! Then Judah promises she can have the third son when he gets old enough, so she goes home.

Over time it becomes obvious that he has no intention of giving her his last son, so she takes matters into her own hands: pretending to be a prostitute, she sits by the road wearing a veil and when Judah (her FATHER-IN-LAW) comes by, he engages her services, leaving his staff and personal seal with her as collateral that he would pay her a goat. Of course he has no idea who she is, and when sends someone to give her the goat, she’s long gone. Fast forward three months and they’re telling Judah that his DIL is a prostitute and pregnant and he wants her BURNED TO DEATH.

At this point, she pulls out the staff and seal and says the guy who got her pregnant was the owner of these things. And Judah, well, he’s like, “Oops.”

Again, wrong on alotta levels: God killing guys directly? Maybe it just meant they met their Maker prematurely? That system they called Levirate marriage (brother marries brother’s widow to make kids for dead brother)? Ack! Girl luring father-in-law into a dangerous liaison? Death penalty for prostitution? Prostitute only, of course, the dude gets off scot-free, right? I can only shake my head and say, what the...???

Again I say, why is this even in the Bible? Other than it is part of Israel’s history? What should my take-away be? I don’t know what it SHOULD be, but here’s where my reflections led me:

If you read further into the Bible, you find that Judah’s family went on to produce a bunch of halfway decent, mediocre to evil guys... but also David, Solomon, and... you got it, Jesus. King of Kings. Lord of Lords. Lion of JUDAH. What could it all mean?

Well, obviously in those days, who your family was was really important. I mean, the Bible is full of begat lists. And "Honor your parents" is in the top ten list of rules... But what I see here is that a person can transcend his or her family’s mediocrity or evil, as the case may be. (I guess today we would say “dysfunctionality”)... which is incredibly encouraging. I know there are plenty of fantastic families out there – composed of kind, sane people who love and support each other... But plenty of people grow up in Crazytown. Lord knows what kind of crazy mixed up family stuff MY son will be writing about US in 20 years! And my own family of origin had some good things about it – we had some fun, and I love my siblings beyond measure... but there were certain prevailing attitudes in our home that didn’t do any of us any good. For instance, I received and believed the assumption that fat kids are unworthy of love... and guess who the fat kid was?

Fortunately, I’ve shed that big FAT lie – after all, my husband loves me and single belly roll and dimple on my chubby thighs. Leaving this notion behind has been a great source of sanity for me.

A friend of mine, who had a much more troubled childhood, had a dream once in which she was climbing a ladder and her mother was right behind her trying to pull her down. In the dream, though, my friend’s mother grabbed onto her sweater but she (my friend) kept climbing, leaving her mother behind, still holding the sweater. My friend interpreted her dream to mean that her family and background would always be dogging her... But I reminded her that she managed to slip out of it and keep climbing.That’s a blessing, that is. She has grown into a lovely woman, full of grace, a beautiful picture of God’s power to heal. 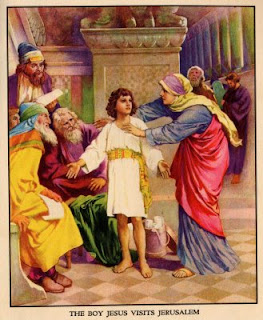 A couple of episodes in the life of Jesus kind of reinforce this for me: First, when Jesus is 12 and goes to the Jerusalem with his parents. When the family sets out for home and realize Jesus is missing, they rush back to find him discussing Scripture with the teachers in the Synagogue. His reaction to his frazzled parents: “Why were you searching for me?” he asked. “Didn’t you know I had to be in my Father’s house?” ie. “You’re not my REAL parents”!

Another time he’s out in a field teaching and a fangirl yells out “Blessed is the mother who gave you birth and nursed you.” to which he says “Blessed rather are those who hear the word of God and obey it.”

So basically, when you’re part of God’s family, you love your old family (the "honor your parents" rule still holds), and cherish what was good... but you can also look forward. His people are your NEW family. And while God’s family is as bruised and broken as any other, it is to be hoped that they’re leaning on the Source of all that is good, all that is love, and all that is right, to heal and transform them from dysfunctional to functional.
Posted by julie moore at 5:36 PM