It Really is That Simple – a guest blog by Lea Holt

So here’s the deal. I have been reading The Big Mouth for quite some time and have realized, yet again, that my music tastes are not nearly as sophisticated as my sister Julie’s nor my brother Andy’s.  They are musical people. Julie can play the piano, though she pretends that her talent is lacking and ho-hum. If you were at the Oxford United Methodist show of Cool In The Furnace in the 80’s, and then at Butner Correctional Facility when we brought down the house for an auditorium of special needs kids and adults, well you would tiff, too. We rocked out to some Jesus, my friends, and Julie totally kicked it. I sang in the choir and was awed by her talent on the piano.  She played this one (of many) really hard songs that I remember her practicing night and day, with our very forward-thinking choir director, also named Julie.   It challenged her and yet she mastered it.  And she, and we, a kids’ choir, totally kicked ass.  It is still one of the best moments of my life.

Fast forward. My brother Andy is also musically talented.  My mother went on a trip  to Greece with her sisters the summer of my senior year of high school, which would have made Andy in ninth grade,  going into 10th.  I remember dropping her off at Greensboro airport.  We were driving her Mercedes (first time ever), sunroof open, windows down, feeling freedom. And Andy basically said “pull over” at a music store he had in mind. He bought his first drum set. He had saved his money and my mom was not there to stop his music thing from happening.  Or to tell him that this was an impractical, very LOUD purchase.

Long story short, Julie and Andy remain, to this day, very “cool” music people. They have a thing I don’t: what others would say, I’m sure, is pretty sophisticated musical taste. Andy writes and produces his own Cd’s... He writes, plays guitar, sings, throws in drum machine and “lays down tracks.” (I’m such a dork that I am thrilled to be able to even use the phrase ‘lays down tracks’ in my writing.) Julie writes about “cool” bands and knows about progressive music and goes to cool shows and incorporates these experiences into The Big Mouth.  She has always had a sense about these things.  Me... not so much.

I used to, I think, when I was younger.  But quite honestly, it came from just being around Julie and Andy.  I remember the first boom box I got for Christmas.  Along with the John Cougar and Stevie Nicks tapes I got, Julie had obviously gotten wind from Santa about this gift, because she made me a mix cassette tape of the music she was listening to at the time.  Love Tractor, The Roches, REM, U2, the db’s, Elvis Costello, Let’s Active.  I listened to that tape endlessly.  I would actually kill for a copy of that mix now...  But anyhoo, I loved all that music. And during that time I became obsessed with the Elvis Costello Trust album – and REM.  REM in a BIG way.  And for some reason, (still a mystery to me) my mother let me and Andy drive over to Chapel Hill in the fall of ‘84, ON A SCHOOL NIGHT, when I was a senior in high school and he was like a freshman, and she let us go to an REM /db’s concert at Duke with Julie and all her cool college friends.  I vaguely remember trying to dress “cool” and 80’s rock, and of course Andy looked, at 14 or 15, effortlessly cool in his thrift store duds, while I looked like a small town high schooler in my Limited big shirt and wide belt.  But that aside, the concert was breathtaking. It was a religious experience for me.  Michael Stipe came on and was waving and flapping his arms all around and floating all weird, which I didn’t get at the time because I was so naive, but he sang my favorite song, Seven Chinese Brothers, to open, which I pretty much thought was a sign from God.  I listened to my favorite band and my favorite music live for the first time.  It was... kinda like singing Cool In the Furnace.  Breathless because you are doing something you love, swept away by great music that speaks to you... dancing and grooving and not caring how you look or what anyone else thinks.

Another fast forward.  Here I am on the cusp of turning 45 (that’s a whole nother post, by the way)... listening to Blake Shelton on my ipod as I am raking the yard.  Yep.  RAKING.  NOT at a concert at Duke.  Not being in any way cool or hip, which is pretty much standard for me.   I obsess about how cruddy my front flower beds look.  I lament the pile of uncut, fallen trees in my backyard that are still there from the hurricane.  I am slightly overwhelmed, but I listen to music and tell myself to take it “bird by bird” – which is a quote about just chilling out and taking things one task at a time, from an Ann Lamotte book.  So I rake and try to get into the task at hand.  It is here that I realize that my music tastes are truly wretched to someone who really knows and appreciates progressive, new, advanced music. Truth be told, I am a country pop aficionado. What happened to me??  I can quote the words. I can quote Brad Paisley songs.  I like Travis Tritt and Toby Keith.  You can pretty much ask me about any pop country music and I will know it. I’m slightly obsessed with Miranda Lambert and her redneck wedding to Blake Shelton.  They feasted on deer meat (from a deer she killed) and moon shine.  I have used Tim McGraw’s chickin and dumplins recipe, which by the way is quite tasty.  And that is pretty much the opposite of cool.

But here’s the thing. I love the stories that country songs tell. I love old Don Williams and The Bellamy Brothers. I love Randy Travis and his rich voice and his telling me that he loves me deeper than the holler and the twang and that their voices and their stories are sometimes the pure focus of the song. Yep. Maybe that’s how I justify it. I’m listening to the WORDS.  All English majory and all.  But actually, I have no excuse.  The real truth is that I am not cool. Maybe back in the 80’s I had a chance at it, but I must have been posing.  I’m also an R&B girl... Me and John Legend – separated at birth.  There is some Flo Rida and Usher on my ipod.  Oh and Nelly and Kelly Rowland.  But the country girl thing is still pretty prominent... Much as I’ve tried to ramp it up, I don’t even love cool bluegrass, like the Avette Brothers.  Can’t get there.  Sadly, I have just accepted that someone with even semi-sophisticated music taste would look at my ipod most-played list and gag.  They might find something to listen to, like U2 or Muse or Santana or Buckcherry (are they cool? Probably not, but my husband likes that as workout music.)

So anyway, after all this explaining about how uncool I am, here is my confession:  the actual reason I wrote all this is that I have listened to Blake Shelton’s God Gave Me You like a hundred times over in the last few days.  I LOVE this song. It is a pop country song. It isn’t sophisticated musically. It’s a hit on country radio. It isn’t ground breaking music by any means. But as I was raking, the words spoke to me. They made me think of Jesus, which is pretty cool... “God gave me you for the ups and downs... God gave me you for the days of doubt”...  Deep, hunh? 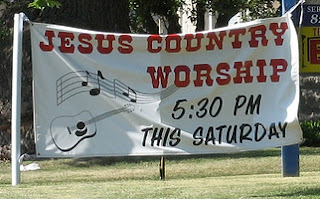 You sort of have to listen to the song... when Blake wails “On my own I’m only/ Half of what I could be/ I can’t do without you... And then “We are stitched together/And what love has tethered/ I pray we never undo.”... Yep. That’s how I feel about my relationship with Jesus. New. Love. Unsure. Will I be able to maintain? Will I untether  it like a jerk (the word I really wanted to use here is ‘asshole’, but I am trying to not offend) or will I hang on and be an equal partner in this love?  I do pray I never undo the love that I have seen from Christ.  I’m full of hope and love and I know that I surely am half of what I could be without Him. I hope with all hope that His love has tethered me so fiercely that I can’t undo it.

So listen to that song. It’s not great musically nor is it “cool.” But it’s pretty cool that Christ can speak to someone listening to a lame pop country love song and she can think about Him and His grace... I am awed by His breaking in on my everyday doings, and I am awed that His love is so very simple. And yet I never knew. Not until I truly accepted Christ and figured out that it really is that damn simple. Hunh. Who knew.  Like a very simple country song, maybe sometimes it isn’t about being cool or progressive or changing the world.  Maybe sometimes, it’s just about listening to Blake Shelton and thinking about Jesus while you rake.
Posted by julie moore at 8:58 AM