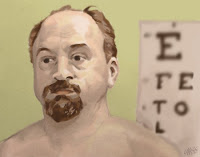 Last night my husband and I watched an episode of a show on FX called "Louie." It is written by and stars a comedian who calles himself Louis CK, and if you are easily offended or in any way sensitive, I don't recommend this show to you. It is brutally honest and shamelessly vulgar.

The show is part standup comedy, part vignettes of him doing everyday things - dating, hanging out with his friends, taking care of his daughters, of whom he shares custody with this ex-wife. There is something I love about him. He is so painfully truthful that I really can't help but admiring him. I actually imagine his honesty as a model for what I want to do with this blog - but much less blue, of course.

He says things like, "The reason we don't do bad stuff is because we don't want to get caught." Which, if I am completely honest, as he is, I would have to say is true. I mean, sure, I do want to be a good person and to please God, but getting caught and going to jail is a much stronger deterrent to me, for sure. I really wouldn't do well in jail.

The latest season has been mainly about his kids. It is so clear that he loves them more than anything. The show last night was about him looking for an apartment to live in with them, and he looks at a gorgeous house that ends up being 17 million dollars... But he imagines how much they will love living in it, and how much it will "fix" everything and he just can't let go of the idea of buying it - even though all he has is $7000.

But then in his standup, he says that bedtime with his girls is torture - he can't wait for them to go to sleep so he go can eat the ice cream in the freezer. Kids are the best things in the world, but this is exactly how it is, right?

I think I love it because he is not saying this stuff like, "Look how bad I am! Haaahaaaahaaaa!" (That was a maniacal evil laugh.) It's purely confessional. He is so self-deprecating, so aware of his own failures, the frustration of being human. He is so true to himself, that I actually find him attractive, which is a little bit funny, as he is no Johnny Depp.

Occasionally Louis probes deeper: Last season they had an episode where it flashed back to his childhood in Catholic school. The principal and teachers wanted to impress on the children just how brutal the crucifixion had been so they could comprehend what Christ had done for them. It was much too harsh for the kids, but it actually had the desired effect on young Louie... In the middle of the night he broke into the school and pulled the crucifix down and was trying to pull out the nails. The poor kid was sobbing and saying over and over, "I'm sorry, I'm sorry."

It was so gripping - sad and sweet - and the show ended with his mother tranferring him out of the Catholic school and telling him "You didn't do anything, don't worry about it." Of course, as a Christian, I would have to say that this is not entirely accurate... but on the other hand, what that child needed was grace. And that's what his mother was trying to communicate to him - sheer grace. And as a Christian, I have to point out the irony... To take him AWAY from the church when he was looking for grace? Maybe it was an indictment of the church and the school, not of the actual Source of grace?

It kind of reminds me of an anecdote I heard about WC Fields: During his last weeks, a friend stopped by his hospital room for a visit and caught him reading the Bible. When asked why, Fields replied, "I'm checking for loopholes." I wonder if he ever figured out that Christ IS the loophole?

Anyway, I love Louie... and I'm rooting for him. I hope he finds the grace he is looking for.