Last night on Facebook when I mentioned that I was having trouble putting together a coherent blog post, a friend commented that coherence is subjective and overrated. With that in mind, here goes...

If I counted all the song references in this blog - all 125 entries - I would feel comfortable betting that the artist / group I refer to most is .... drum roll.... Soul Asylum. I don’t really know all that much about this band that came out of Minneapolis in the 80s/90s... But I do know a good song when I hear it, and they have plenty.

I never got to see Soul Asylum in the 90s, when they were huge - riding the wave of their hit Runaway Train, dating Winona Ryder, cameo-ing in Gen Y movie Reality Bites... but later, I got to see them at one of those outdoor downtown concerts in Raleigh, where everyone is drinking plastic cups of beer and wearing khaki shorts and Tommy Bahama shirts. And they acted kind of obnoxious, really. I think they had been told to watch their language, but... being a rock-and-roll band, you know they did just the opposite...

But the songs... oh the songs... They were inspired and inspiring, great melodies, soaring guitars, punkish drum... They have lyrics that make your mind soar, over anthemic-ish, hard driving music that made me dance with my arms in the air, embarrassing my husband no small amount.

I don’t think he loved it like I did. He said, I wonder how those guys feel having to play crummy shows like this, but my thought was something like: well, if I had written songs like they’ve written, I would be riding THAT, not the size and kind of shows I played. Of course, this is easy for me to say, as they probably have families to support.

I also recollect having seen Bob Dylan play at Kings Dominion once and thought the very same thing... it looked like the fall of the once-mighty – but, again, if I had written a song like Blowin’ in the Wind, why would I care?

It’s a little like the Christian life... As Soul Asylum says, “It ain’t on what you can depend, it’s who you can depend on!” You don’t have to BE SOMEBODY because you HAVE Somebody. Or, because you have Jesus, you ARE somebody - HIS! And as Soul Asylum says, “When you watch over me I am blessed.” See I could go on quoting this stuff all day... Of course they also say things like, “Sent on a mission to see just how much sh*t one man can take!” (same link as above!) On the other hand, barring the rude word, couldn’t Job say the same thing? Doesn’t everybody feel this way from time to time? 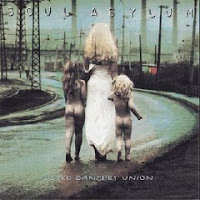 I guess I have to qualify, too, that I am not intensely familiar with ALL of Soul Asylum’s albums. The two that I have worn out are Grave Dancer’s Union and Candy from a Stranger. I highly recommend these if you like thoughtful lyrics paired with powerful, well-arranged grunge/rock/pop music. I can’t really speak for the other albums, as I haven’t memorized them as I have these two. 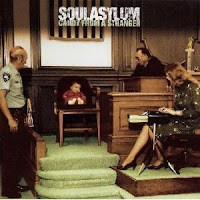 Primarily written by lead vocalist Dave Pirner, their songs speak closely to my personal take on the Christian life. And not just in the easy way of interpreting love songs to be about God’s love. No, they’ve got songs about more complex concepts, like – among other things – repentance, humility, heaven, stepping out in faith, the dark night of the soul, shedding the constraints of our fallen humanity, and spiritual formation.

I have not found any evidence in their publicity or online bios to show that they have any particular religious affiliation, so if they are Christians, they’re pretty secretive about it... I mean, they could be, but there’s no CLEAR evidence of it (such as, wearing WWJD bracelets, leading worship in their local church or doing any of the things on the Stuff Christians Like blog)... But it’s just so obvious to me that I have to wonder what they’re talking about, if they’re not talking about ... the Christian life. Would Dave Pirner be surprised to know that his lyrics reek of Christianity? Does he do it on purpose? Or is it just that when people write about hope and love and humanity, are they bound to stumble over Christian themes if they’re not careful....?

It makes me wonder if he’s not so Close that he just needs Somebody to Shove him... Does he know it? Is that why he sings on his solo album, “And peace will be with me. Yes, I’ll have my day.” That would be cool, wouldn’t it?!

Of course, when I listen to their music, it doesn’t matter to me what their religious affiliation is, because I can interpret the songs however I want to, right? In fact, maybe I’m just reading the Jesus into it because that’s how my brain works. That doesn’t matter to me either. I mean, if it reminds me of the grace I need so badly then I’ll take it! Especially if it rocks like Soul Asylum...
Posted by julie moore at 11:00 AM