My husband has a singular sense of humor. He has a phenomenal memory, and obscure references and repetition figure pretty heavily into it. Not everybody gets it, but I really do. We laugh and laugh at our house. This is the reason that if you bring up Patti Smith, there is a 99% chance he’ll say, “prophet.” Because back in college he once found himself in one of those “deep” late-night discussions with a theatre major, in which she declared that artist/songwriter Patti Smith was a “prophet.” Obviously, he thought it was funny, since it pops out again and again... and I can’t say for sure that Patti Smith ISN’T a prophet, but according to what I have gathered from my studies, she seems to be a bit too cool to be a prophet... in the historical / Biblical sense.

Granted, Ms. Smith is quite the writer. If I’m not mistaken, she’s been churning out rhyme and reason since she was a zygote. And some of it’s quite nice. That’s like the prophets, right? They certainly scratched out some beautiful verses... So beautiful that Handel set them to music. If you’ve ever sat through the butt-numbing entirety of Handel’s Messiah, and thought, “Who was his lyricist? This is fantastic!”... Well, a lot of it was lifted straight out of the scrolls of locust-eaters like Isaiah, Zechariah and Haggai.

Maybe the girl who called Ms. Patti a prophet was speaking of her writing... or maybe the girl thought Patti has some super insight into life and the human heart. But... as prophets tend to address society’s ills and make predictions on where we’re all headed, I’d be more likely to lay the prophet label on someone like Woody Guthrie, who wrote many a protest song... or Bob Dylan whose outrage scalded vinyl back in the early sixties.

Yes, I’d say Patti’s more poet than prophet in this case. She did write Because the Night with Bruce Springsteen (who is higher rank – a prophet or a boss?), but she’s never actually professed to speak for God, I don’t think. The Biblical prophets were always prefacing their speeches with stuff like, “This is what the Lord says concerning...” or “Thus says the Lord...”


Woody and Bob never said they were speaking for the Almighty either, although I heard Bob say in an interview once that he believed some of those early songs were a gift - poured into him from an external source (or Source, as the case may be!) Now, if you think about this too hard, it could lead to the logical conclusion that God was indeed speaking through him... and racism and senseless war may well have been things that God wanted to come out against at that time. I mean, that IS the kind of thing God hates, right? But I don’t know. I can’t draw a firm conclusion about this.

Bob – and Woody and Patti – also never attempted to predict the future, which is another thing prophets do. Not like a fortune teller with a crystal ball, or Johnny Carson with a turban on... or Nostradamus or Edgar Cayce or Sparks. But from God’s mouth. In my view, the absolute peaches and cream of being a prophet would be knowing the mind of God. One of my huge frustrations is always wondering, “What does God think about this? What does He want me to do?” That’s why I love the Bible – being words that He had put down on paper and preserved for us to read, it’s the closest thing I’m going to get to being addressed directly by Him - on an average day, anyway.

Other than that, though, those prophet guys had terrible lives, as we rate lives today. Even as they rated lives back then! They were always doing stuff like living in deserts and eating bugs, marrying unfaithful prostitutes and speaking out against bloodthirsty rulers – who would subsequently try to have them killed. Lots of other people hated them them, too. And as much as I hate discomfort, I’m thinking this would be MY least favorite thing about being a prophet.... because you know how I want everybody to like me. I know it’s not possible or necessary, but as the chubby girl with glasses, I’ve always got that little thing in the back of my head. So, I’m thinking that calling Patti Smith a prophet is a stretch. She’s way too admired and probably lives in some funky but pricey brownstone in New York City that she owns outright.

Since we’ve just been finishing up the Old Testament in our reading of The Story, I was just wondering what it would look like if a prophet were to emerge today. Not a person with a prophetic temperament, but a real predicting-the-future-from-the-mind of God prophet. And, weirdly, I stumbled across a couple of things... 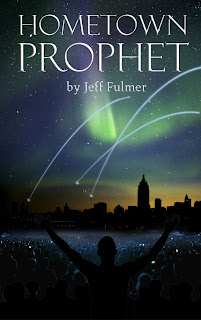 The first was a book called Hometown Prophet by Jeff Fulmer... It’s a story set in Nashville about a down and out character – out of a job, living with his mother, sour at life and at God... who starts having prophetic dreams... a flood, an economic crisis, an industrial disaster... as well as a few more personal ones. Once it becomes clear that they are actually coming true, he tries to get the warnings out to those concerned. And while a few close associates rally around, Peter, the main character, experiences a fair share of abuse from acquaintances, some local churches and the secular media. While not a great work of literature, it is a fast, absorbing read, and I thought it gave a pretty good picture of how a prophet might fare in today’s power-, money- and media-driven society. 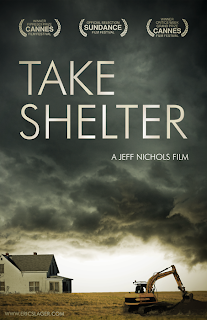 Just a few days after I finished reading that book, I saw the movie, Take Shelter, about a man who starts having nightmares of storms and disasters. In a low-level panic, he starts building up and outfitting the disused storm shelter on his property, while his wife and friends look on, mystified... worried. He fears he may have inherited his mother’s schizophrenia, so he seeks medical and psychiatric help. He also continues to act on his fears. He loses his job, spends all his money and alienates his friends and family. I couldn’t help thinking about Noah building that huge crazy ark while everyone looked on a laughed. I’m not going to tell you what happened in Take Shelter – I’ve already shared too much of the plot, if you were thinking about watching it – but this story, too, was an absorbing, scary look at how people (including the prophet himself) might react to a prophet these days.

I remember when 911 happened – Pat Robertson said it was because of gay people. While I found that kind of hilarious and way off base, I also thought, “That’s the kind of stuff the prophets said.” Now I think I was wrong about that. Maybe if Pat had called to account our systematic abuse of capitalism and our neglect of the poor, we could have likened him to the guys in the Bible... because that’s the kind of thing the prophets REALLY said...

Anyway, as with most posts, I’m not sure where I’m going with this... Here are a couple of concluding thoughts:  1. Being a prophet was –  and still would be – a veeeery hard life. 2. In that sense, Patti Smith is most likely not a prophet.
Posted by julie moore at 1:24 PM