Just Writing This Made Me Feel Better

So.... I’ve been writing this blog for  a year... or something...? And it finally happened... someone dissented. Out loud. I mean, people probably disagree with me all the time – and that’s perfectly okay! But this is the first time anyone ever said anything... ! And, Ow! That hurt!

Of course, I admit, I’m a fairly thin-skinned person. I’ve said so before. And this person may not have intended to insult me, but that was the tone in which I took it - kind of snarky, y'know?


Now, I know in my head that some topics that I address can be controversial – isn’t the general advice that one shouldn’t discuss religion or politics at a party? But here I am talking religion like it’s the weather. Really, I guess it’s a miracle that my blog has been out there for a whole year and no one’s said anything negative. And, furthermore, as David Byrne would say, this ain’t no party! Okay, well, it’s kind of a party... It's fun for ME, anyway!

Nonetheless, the negative comment and tone hurt my feelings – since I’m a people pleaser and all. I’ve been really bummed, to say the least. My initial reaction was to drop out... just stop writing. Because, after all, who am I to put myself out there? And even though I try to present my musings with humility – fear and trembling and the like, is it really something I should be doing? Does the world really need or want to hear the freaky ramblings of my addled brain?

I don’t know. But, as you can see from this post, that I’m going to keep doing it anyway. ‘Cos I like talking about stuff – especially Jesus. But you knew that. And I used to have this fantastic friend with whom I used to engage in endless conversations and debates about life and God and all that. We had views that differed widely, and she was a great arguer... I don’t mean that she was argumentative, but she was really good at arguing.

I am a great avoider of confrontation, so in the early part of our friendship, I was alarmed that we always seemed to get into these intense debates... but then I realised (because she told me) that she loved it, and considered ours a rich and deeply rewarding friendship.

And while everyone loves having friends with whom they see eye to eye on many deep things, it is also good to have friends who challenge us. “As iron sharpens iron, so one person sharpens another.” (Prov. 27) So, if you disagree with me – and there must be plenty of others who do – I am hoping you’ll still view me as a friend... albeit one with some kooky ideas that might just need to be further informed by your own unique slant. Just... let's be nice about it, okay? My skin is ever so thin just now... 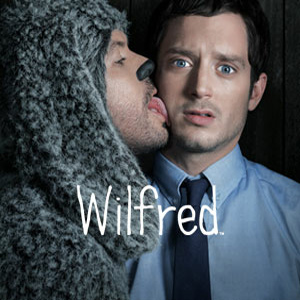 In the meantime, I'm trying to get over my bummed-out feelings, and the fear that I said something to upset the person who seemed upset. I'm just one of those people who tends to mull over stuff way longer than I should. Have you see that FX show Wilfed? You know, the one where the guy who plays Frodo is a lawyer who sees his neighbor's dog as an Australian guy in a poorly-made dog suit?


Well, Frodo and Wilfred hang out a lot in the basement smoking weed, while Wilfred orchestrates elaborate situations that teach Frodo lessons. Last week, he (Frodo) learned about prolonged feelings of unnecessary guilt. Wilfred said something like, "You know how long it takes a dog to move on?" Then he'd look at his imaginary watch for about 3 seconds and go about his business, which often includes rubbing against a stuffed bear or chasing his tail.


While this will never be me, I am sure that progress could be made in this area. Because keeping my mouth shut is not the way this is going to go down – even though it IS sort of like me to avoid failure by not stepping out. But it shouldn't be, so I'm just going to have to develop some kind of thick, scaly skin. Maybe I can arrange to have the psoriasis that plagues my knees and elbows cover my whole body? Or maybe I'll just keep it metaphorical.