A Pirate's Life for Me!

Talk Like a Pirate Day – really? That’s a thing? You bet your aaaarrrrrse! Okay, I’m sure if you’re reading this, you’re savvy to the phenomenon that has people saying things like “Shiver me timbers!” and “Yo ho ho and a bottle of rum!” with unfettered joy on September 22 every year. Since 2002, anyway, when a group of friends initiated this rapscallion of a holiday. If you want the details, go here (http://www.talklikeapirate.com/about.html)

Another thing that you may know about as a tech savvy consumer – blog reader, web surfer, etc. – is that you can change the language setting on your facebook page to be “English (Pirate).” Bill loves this. It calls all your friends “Cap’n” and asks you to “Update your captain’s log.” And for “Like” it says, “Arrrr.” It's awesome.

Why? Because pirates are awesome. You just have to look at Johnny Depp as Captain Jack Sparrow … or the guy he copied – Keith Richards – to know this. And there’s Adam Ant (80s version) dressed as the dandy highwayman, right? The pirate look is sweet, n’est-ce pas? Tres chic. I think we should have “dress like a pirate day!” That, I could dig with a big fat barnacle-covered shovel.

I guess, objectively speaking, pirates were robbers. And not as clean or fresh smelling as you or I. On the other hand, according to Mutiny! Why We Love Pirates and How They Can Save Us a fascinating book written by a guy named Kester Brewin, piracy should be the wave of the future… an ideal we all should aspire to.

Brewin discusses historical pirates – guys who escaped the brutal near-slavelike treatment of the British navy, to experience freedom and a share of the profits. He describes the pirate’s life as hard work, but bound by honor and much more egalitarian than traditional sailors' lives.

He also speaks of the gradual enclosure of land and the loss of community “commons” of British rural life. With the increasing claim of previously public land by business concerns and the nobility, regular folk had no open land to farm or graze livestock on. This led to the The Midland Revolt in 1607 in the England against landowners led by a tinker named John Reynolds, aka “Captain Pouch.”

Depending on your political bent, this may or may not sound familiar to you. Brewin then goes on to discuss pirate publishing concerns as well as pirate radio and modern day sea pirates in Somalia. His examples illustrate much-needed rebellion against the systematic domination of a “territory” by the few, to the detriment of the many. Or the 1 percent, over the 99 percent, if you will.

In every case, the pirates were those that challenged the system of enclosure and sought to reclaim the rights and territory that they had been forced out of. Now, again I say, your view of this will most likely coincide with your political leanings. A good analogy that he uses is that it is likely the millionaire Mick Jaggers of the world who gain the most from copyright laws, rather than the struggling musicians.

Author also used to piracy as an analogy for the rebellious act of growing up, using Wendy’s slaying of Captain Hook in Peter Pan, and also the conflict between Luke Skywalker and his father Darth Vadar in the Star Wars movies as examples. In these cases, the piratical acts of the children lead to reform of the parent as well.

You may not buy into his idealization of pirates and the necessity of rebellious acts to shake things up. But I kind of like the idea of going rogue. I used to work with a guy who liked to begin sentences with “When I’m on the lam…” I love that. I know he was joking, but he actually did move to L.A. to make his fortune, meet a fantastic wife and make the cutest baby since… well, mine… And even though I knew at the time he was joking, I was pretty jealous of his adventurous spirit. Even now, he’s in Japan doing some wild thing or other.

And you know where I’m going with this, right? To the most notorious pirate of all, the rebel Jesus. That’s right. The guy who hijacked the Jewish religion and gave it back to the common people. When Jesus came on the scene, the Pharisees and Saducees had taken this relationship with their God and made it into a complex system of rules and ways to control and condemn people.

I’ve been reading Leviticus lately, and believe me, the rules God gave the Israelites in the desert actually were pretty complex and strict. The Pharisees didn’t make that part up, but if I understand correctly, it was the attitude of judgment and entitlement that they oozed, their love of power, that got under Jesus’ skin... their "we're right, you suck" demeanor.

If I read correctly (and chances are that I didn't) Brewin seems to imply that Jesus hijacked the Jewish religion from His own Father, but it seems to me that He reclaimed it for the Father and for the people He loves. God is love and has been so from the beginning. It was the crazy priests that had enclosed the commons, I think. 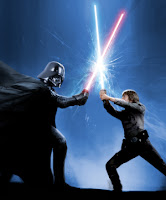 See? It was all part of God’s plan. Not that it was a subversion of God Himself: “For God so loved the world that he gave his one and only Son, that whoever believes in him shall not perish but have eternal life. For God did not send his Son into the world to condemn the world, but to save the world through him.” (John 3) Arrrrrrgh! (Pirate English for "Like")

Brewin also gives the tale of the Prodigal Son a new reading in which the Father is the tyrannical landlord and the son the righteous rebel who failed and slunk back home. Certainly, we can read things however we wish, and you know that I so often do – pulling out lines of pop songs and movies to reference whatever I want them to. I also love that Brewin carries his exploration of the pirate spirit to the nth degree with this challenging picture of son seeking his own way. Nonetheless, I think I'll stick with the traditional interpretation of the loving father rejoicing at the return of the son he loves. 'Cos I guess I'm just a traditional gal... and I like to think that no matter how far I wander, my Father will embrace and welcome me on my return.

Anyway, despite the fact that I'm a bit too much of a tight-assed Evangelical to buy into some of the book's assertions, I like how Brewin writes, and I loved reading this book with its subversive (mutinous, if you will) views on redistribution of wealth, art and faith – things that ought to belong to all, but have been enclosed by a select few.
Posted by julie moore at 5:51 PM