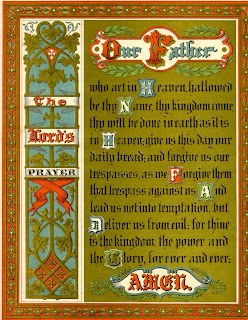 I was thinking about what I wrote in the last post about raising a spiritual being, and thought maybe I should have put a little more emphasis on the prayer component… because that’s pretty freakin’ important. I mean, we’re certainly talking about matters that are in God’s realm. Okay, I know that there’s nothing that ISN’T in His realm, but this especially is.

Anyway, I can certainly talk 'til I’m blue in the face about religious stuff. I can make Bill go to church. I can send him to Catholic school… I can (attempt to) model what I think is authentic Christianity… However, these are all just EXTERNAL things a person can do, while it's primarily an INSIDE job. That is to say, it’s mostly about what’s going on with God and in Bill’s heart isn’t it? Something I, personally, have no control over. But God does. I do believe in free will, but I also believe that God can influence us, change us, help us think about things right. And maybe it helps if we ask Him to.

This is where prayer comes in. Now, I am not saying I am a champion contemplative, because I certainly am not... So if you're looking for a deep theological treatise on prayer, you won't find one here. There are plenty of great books you can read like Richard J. Foster's Prayer: Finding the Heart's True Home. I can only tell you about my experience. It is very hard for me to just sit and pray. I do say some of my own loose prayers – especially during moments of insomnia... but I get distracted very easily.

That's why I find that pre-fab prayers like The Lord’s Prayer come in pretty handy when I want to get busy with God, but don’t have the words. I guess it could be argued that prayers from another person’s brain are impersonal, but the way I look at it, I am normally so distracted that I would be only slightly more involved if I conceived the prayers myself. Plus, in the case of the Lord’s prayer, Jesus Himself gave it to us, so what better way to pray than in the words of God Himself?

Anyway, one source of prefab prayers that I love is a book called The Power of a Praying Parent, by Stormie Omartian. It has about a month’s worth of prayers – specifically designed for parents who want to raise kind, God- and people-loving kids. Each prayer speaks to a topic like health and safety, a sound mind and eagerness to learn, loving relationships, integrity, faith, etc. I say a prayer from it most days for Bill. (I also have the Power of a Praying Wife book, which I also pray from.) Omartian may be a little more conservative on some things than I am, and she does look like an actress playing a TV evangelist… but when it comes down to it, we are both interested in the same basic things: God and our kids.

On a silly side note, Tom thinks it’s hilarious that before she was a prolific Christian writer married to a Christian music producer, Miss Stormie was a girlfriend of… Steve Martin! I’m not really sure why that’s funny, but… oh well. I certainly have things from my own past that would produce explosive guffaws.

Moving right along… as to what difference prayer makes? Well, I certainly have been held up in prayer on many occasions, and let me tell you, it certainly doesn’t hurt. No one ever asked me NOT to pray for them, anyway. I often wonder what famous Christopher Hitchens, who called himself “antitheist,” would have thought if he knew that people were praying for him. His definition of  this self-coined term is – someone who thinks there is no God, and is relieved about it rather than bummed out. I think his writing was thoughtful and provocative, although my world view was much different in many ways. When he was diagnosed with esophageal cancer, I would say a prayer for him whenever I saw his byline in Vanity Fair, or whenever he came to mind.

Had he known, what would he have thought of that? Were he a mere atheist, I guess he would have thought it a waste of time. But as an “antitheist” would he have been offended? I’m sure I’ll never know, but I do know that since he didn’t know, it didn’t hurt him. And, since my world view involves a God who cares about people, maybe it helped ease his suffering in some small way. Maybe Mr. Hitchens is a dumb example – an extreme case. In my experience, many folks have some idea of the usefulness of focused positive thought or prayer. Other folks I know who are not actively involved in a particular religion, will in times of trouble as people to “think of them” or “send good vibes out to the universe” or something like that.

I think now would be a good time to bring up one of my favourite story lines from Doctor Who… The episodes in question: The Sound of Drums and The Last of the Time Lords. It’s really hard to explain Doctor Who to the uninitiated, but … here goes. Doctor Who is a powerful “Time Lord” from another planet who can travel through space and time in his space ship that looks like an old fashioned British telephone booth. In these episodes, another, quite evil Time Lord – the Master – has it in for him and the whole human race besides. To render The Doctor powerless, The Master makes him age superfast until he is just a wizened little Gollum-like creature.

Leading up to the events I am about to describe, The Doctor’s friend Martha has been going all over the world for a year, reputedly looking for the ingredients for a special gun that will kill the Master. When she shows back up the Master destroys the gun, and starts the countdown to a specially-timed, previously announced, invasion of alien spaceships…

The countdown begins, and Martha smiles. The gun had been a fake. What she’d really been doing is telling everyone she met all over the world, about the Doctor: “He has saved your lives so many times and you never even knew he was there – but I know him, and I love him.” She instructs them to concentrate their thoughts on him at the scheduled time of the invasion. (This is long and confusing, isn’t it?)

She tells the Master this, and he is is all, “Faith and hope? Is that all?” and “Is THAT your weapon? Prayer?” So the countdown reaches zero, and everyone in the entire world says, “Doctor” and all the psychic energy – boosted by the Master’s own telepathic communications network – causes the Doctor’s aging to reverse and replenishes his power… causing him to glow and float and do magic! After a lot of hullabaloo of course the Doctor wins the day, saving the world, and even FORGIVING the Master.

Of course, this is just a far out sci-fi story, but the show, as I pointed out here, often touches on themes that point to the true Lord of Time, or “The Potentate of Time” as the hymn goes… and I imagine that the devil wants us to imagine that he does a big cosmic eye roll at our “frail” little psychic weapon. But, I bet he fears it… that's why he's always doing his best to divert us from it with his own puny weapons – like fear, apathy, and distraction.

Yes, that crazy devil knows how huge prayer actually is. See, with my own two hands I can help a few people. But with my prayers, I can participate in the blessing of countless lives. And joined with the world’s many Christians, my puny little prayers can jiggle minds, topple fortresses, change entire world systems.

And it's not like God NEEDS our prayers to accomplish things, but I think he loves us to work with Him to get things done. He loves us to be involved. I just had the picture flash before my minds eye of a time when I had Bill help me make macaroni and cheese when he was about three years old. I certainly didn't need his help – I can make it myself, but it was so sweet to have him in there "helping" me... That's sort of how it is maybe... Our great Father, working with us in His cosmic kitchen to change the world... and maybe even my own kid’s heart.
Posted by julie moore at 12:10 PM