So, I freely admit that since I first read the Twilight series by Stephanie Meyer, I acquired the complete set of unabridged audio books on CD and have been listening to them in the car. In sequence. Over and over. I’m not kidding. But this month… October 2012, let the record show that I finally reached saturation point.

Not being as tech savvy as my husband, I haven’t yet figured out about playing my iPod through my car radio, so I got out my dusty old CD wallet and put in a CD. (That I loaded it in the 90s was obvious by its contents: Hootie and the Blowfish, Blues Traveler, The Black Crowes…) So first I played The Best of Elvis Costello, followed by Neil Young Unplugged… I finally got stuck on The Crash Test Dummies, The Ghosts that Haunt Me.

Now, if you aren’t familiar with the CTD’s, they’re a fantastic Canadian band that had a hit or two during the 90s. The distinctive deep baritone (aka sexy) voice of their frontman, Brad Roberts draws you right in, but their arrangements shimmer and their songs … well, the lyrics are intelligent and philosophical. It is easy to hear that they are influenced by XTC, another smart, whimsical band.

One of the fine, thoughtful tunes on this opus is called Superman’s Song, which contrasts the wild, uninhibited Tarzan with the powerful but reigned-in Superman: “Tarzan wasn't a ladies man, He'd just come along and scoop em  up under his arm like that, quick as a cat, in the jungle.” On the other hand, “Hey Bob, Supe had a straight job! Even though he coulda smashed through any bank in the United States. He had the strength but he would not.”

Here’s the chorus: “Superman never made any money, Savin' the world from Solomon Grundy. And sometimes I despair the world will never see another man like him.”

Of course, you know where I’m going with this. Superman = Jesus in this metaphorical musing. Tarzan = us. Regular joes. Fallen man. So, what really stood out to me was this last verse that went like this:

“Sometimes when Supe was stoppin' crimes, I'll bet that he was tempted to just quit and turn his back on man, join Tarzan in the forest. But he stayed in the city, kept on changin' clothes in dirty old phone booths 'til his work was through. Had nothin' to do but go on home.” 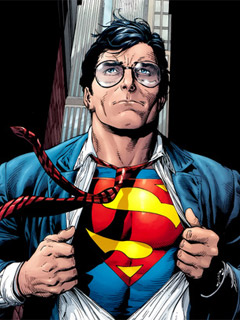 No, I don’t find it unreasonable to think that Jesus, in his human form, was at any time tempted just to get married, have kids and make furniture for the rest of his days. Lucky for us, he did what he was sent to do… accomplished his raison d’etre… As Paul says of Jesus: “Who, being in very nature God, did not consider equality with God something to be grasped, but made himself nothing, taking the very nature of a servant, being made in human likeness. And being found in appearance as a man, he humbled himself and became obedient to death— even death on a cross!”

Now, I haven’t been required to die on a cross or anything, but occasionally I’m tempted to throw in the towel. To just go my merry way, doing whatever I want, not “burdened” with the responsibility of having to wonder things like “What does God think of this?” and “What would He have me do?”

Now whether or not I would "lose my salvation" is a hotly debated theological question. Some feel "Once saved always saved," while others believe that a complete fall from grace is possible. I am not equipped to argue either side, so I'm not going to go there. I'm just going to talk about sheer quality of life here.

And the funny thing is, I’m not at all sure that going my own way would be very enjoyable. I mean, what would it be like? How would it be different? It’s hard to imagine, frankly. Perhaps I would just succumb to every temptation instead of struggling over it. Or… maybe temptations would no longer be temptations, but merely opportunities. I guess I’d have to develop my own moral code to guide my activities, right? Certainly there are general guidelines people follow. Murder and stealing are frowned upon by many. Views of other commandments are more fluid… Coveting is not usually frowned upon today… Sexual ethics, too, are not universally agreed upon.

I guess my world view has been so heavily influenced by the moral code of my faith that it would be difficult for me to go any other way. But the Christian life is not just about morals and temptation… it’s about GRACE. The grace of God, is a much bigger deal to me than any kind of rules. But if there are no rules, there is no grace. And there has to be grace. For me, anyway… because I fail so much in so many areas. Not just in keeping "the rules" but in sheer lack of everyday love and kindness.

I would miss God’s grace, and … well, I would miss my friend God. I mean, you guys are great, but... not exactly omnipotent, omniscient and omnipresent like my pal God. And maybe my life would become much flatter. I would cease to see the added dimension to art and life that my friendship with God brings. That means… I’d have nothing to write about! Nothing to hold on to... I think I would find myself saying, as Peter did, "Lord, to whom shall we go? You have the words of eternal life.” (John 6)

So, while this temptation to go my own way is not, as I outlined above, necessarily reasonable, it happens to me nonetheless… when I am tired, and/or on the horns of a dilemma. And I don’t think it’s unique to me. Jesus tells his friends, “Remain in me, as I also remain in you. No branch can bear fruit by itself; it must remain in the vine. Neither can you bear fruit unless you remain in me.” If it were obvious and easy to "remain in Him," why would he bother with this plea? Paul's letters, too, are loaded with encouragement for the people in the churches to cling to the grace of God and the truth of the gospel. If it we were not likely to be tempted to go another way, he was wasting his breath!

I'm not at all sure why these weird thoughts come to us... the devil? Original sin? When they do, though, how will we respond? How will we choose?

Remember in Spiderman 2 when Peter Parker decides to stop stopping crime, and walks around nonchalantly enjoying the city to the tune of (if I remember correctly) Raindrops Keep Fallin’ on my Head, focusing on his studies, repairing his relationship with Mary Jane…? Of course he gets sucked back into the being Spiderman… because that’s who he is. Being Spiderman is not just about wearing a suit... no, he is chock full of radiation, right? I mean, when you have sticky hands and feet and can shoot webs... well, you ARE Spiderman.

I hope that should I ever think it’s a good idea to go my own way that I would find, like Peter Parker, that it’s just easier to be who I am… chock full of the Holy Spirit... a child of God, nothing more, nothing less.
Posted by julie moore at 9:08 AM