I will confess right now that I didn’t think Seth McFarlane was necessarily the worst Oscar host ever. Sure he was offensive and immature… but what did people expect? Isn’t that his schtick? My favorite gag he pulled was the Sound of Music reference when he introduced Christopher Plummer! Baaahhaaaaaa!!! Well, I thought it was funny, anyway. 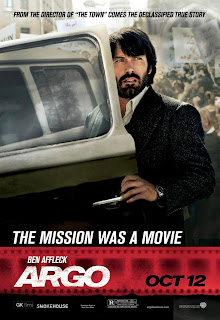 I don’t know about you, but I am still not used to having so many Best Picture nominees. Does it cheapen it? I don’t know. Before we had a kid, it was not unusual for us to have seen ALL of the feature-length nominated films IN THE THEATRE. Now, we do the best we can.

In the case of this year’s winner, Argo, we managed to “rent” it from iTunes the night before the Oscars aired. My husband, ever the critic, said, “It was okay,” like he says about most things he doesn’t outright despise, but I gotta say I really liked it… and if you saw it, you can probably imagine why.

Because of course, if a movie is about a guy rescuing people, I’m going to leap right to a Jesus comparison like I always do, right? Well, of course I am. Because that’s exactly where my one-track mind went.

I’m probably the only person in the US of A who hadn’t seen it by this time, but if you haven’t, Argo is based on a true story, and takes place during the Iran hostage crisis during Jimmy Carter’s presidency. All the people at the American Embassy were taken hostage by the insanely angry Iranian revolutionaries. Six Americans escaped and were holed up in the Canadian ambassador’s abode, and the CIA was tasked with getting them out.

Enter Ben Affleck as Tony Mendez – a guy who specializes in rescuing people. His crackpot scheme involves going to Iran in the guise of a Canadian movie director scouting locations for a sci-fi film called Argo. His elaborate plan involves setting up a production office, running ads in Variety, and staging events with actors in costume. The muckety-mucks at the CIA don’t think much of this, but the best they can come up with was having them ride bikes hundreds of miles to the Turkish border.

So despite complete lack of support from the CIA… even when they try to pull the plug on the operation at the last minute, Tony Mendez keeps moving. Says the CIA guy: “Six Americans get pulled out of a Canadian diplomat’s house and executed, it’s another world outrage. Six Americans get caught playing movie make-believe with the CIA at the airport and executed, it’s a national embarrassment.” Yeah, the CIA is worried about their image.

But not Tony. He can’t just leave those people there because… well, he just can’t. He goes forward with the plot because… it’s what he does. It’s who he is. “We’re responsible for those people,” is what he says.
(Which brings to my mind these two stories Jesus told: “Suppose one of you has a hundred sheep and loses one of them. Doesn’t he leave the ninety-nine in the open country and go after the lost sheep until he finds it? And when he finds it, he joyfully puts it on his shoulders and goes home. Then he calls his friends and neighbors together and says, ‘Rejoice with me; I have found my lost sheep.’  I tell you that in the same way there will be more rejoicing in heaven over one sinner who repents than over ninety-nine righteous persons who do not need to repent.

Or suppose a woman has ten silver coins and loses one. Doesn’t she light a lamp, sweep the house and search carefully until she finds it? And when she finds it, she calls her friends and neighbors together and says, ‘Rejoice with me; I have found my lost coin.’ In the same way, I tell you, there is rejoicing in the presence of the angels of God over one sinner who repents.”

See, to God, it's not just about image or numbers; each individual is precious and savable.

But back to our story… Of course when he gets there he has to convince the six people to buy into it. Needless to say, they’re scared. Some have a hard time trusting him. Maybe they had expected a showy military rescue with Navy Seals or Green Berets or something.

The most doubty guy sarcastically spouts off to him, “Is this the part where we say,  ‘That’s so crazy it just  might work’? C’mon...” Because, yes, it is a crazy plan. Then he tells the rest of the hiders, “That man out there, he’s got bad cards, he’s gonna lose. If he loses, it’s our lives. But then his wife says, “And his life too.”

Because that’s just it. That guy risked his life. “I’ll be with you,” Tony says, “This is what I do.” And God didn’t use his awesome power or his avenging angels to save us, did He? He got right down in the dirt with us, took on all our pain and humiliation Himself, and is even now carrying us out of the crazy, riot-torn country country with Him... even the doubty ones. Whoever wants to come, really... just fall in!

It reminds me a little bit of the Lord of the Rings – you know how Sauron expected his opponents to use the ring to obtain power and defeat him. It never occurred to him that they would destroy it. It was a plan too subtle for his evil mind. Because sometimes that’s what is needed. Remember when Jesus told his disciples, “I am sending you out like sheep among wolves. Therefore be as shrewd as snakes and as innocent as doves.”

Maybe the comparison of Argo to our own rescue from sin and self is a little obvious and amateurish, but I don't really mind. Any story or piece of art that reminds me of it is a thing of beauty to me!