The Secrets of Leaven, a book review 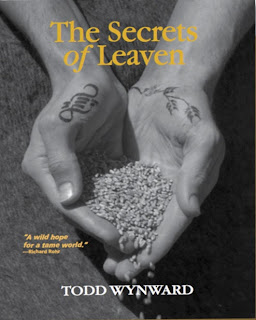 I tell stories sometimes, right? Little anecdotes about my kid or my adventures in marriage… They’re just snippets, though. Tiny pictures of real life that are more point than plot. That is, they direct the reader to some kind of  POINT I’m trying to make about something about life or theology or God or something.

Anyway, THIS I can do. What I have NOT done successfully is write fiction. To be honest, I haven’t really tried… mostly because it seems so daunting. I mean, I wouldn’t want to write “chick lit,” which is defined by Wikipedia as “genre fiction which addresses issues of modern womanhood, often humorously and lightheartedly.”

I admit that as a modern woman, I do have issues, and I do often write in a humorous and lighthearted fashion. So… this might not be a stretch for me… That said, I don’t think chick-lit is my thing because… well, I’d rather write for the whole human race than just gals. Plus I’d want to SAY something… to address deeper issues. I’d want to entertain people, but I also want to bring them nothing less than the Kingdom of Heaven… because that’s the deepest thing of all. And when I put it this way… that’s when the task becomes daunting.

What I do here … telling you stuff, weaving together real life, pop culture and scripture in an expository fashion… is not hard for me. To tell a story, though – one that speaks to greater themes and resonates with the reader’s soul – well, that would be crazy hard.

That’s why I am pretty impressed by this book I just read: The Secrets of Leaven by Todd Wynward. It’s a novel, yes, about a guy in seminary – Thomas Widman. And you sort of get to know him, to feel for him as he moves through his days… but the story grows… shooting off into several different directions… And we stumble along with him as he struggles with his life and faith. He unearths secrets about his family – which includes the leader of an early 19th century end-times cult. And he discovers the existence of a secret brotherhood that pulls enfolds him and renews his joy in following Jesus.

Now THAT’s what I’m talking about!! It’s a modern man tale a la Nick Hornby, but it plunges into the grimy depths of the dude’s belief and disbelief. Sure it has mysterious sects and archaeological discoveries reminiscent of, say, The DaVinci Code. But it also addresses big things like, what is the essence of following Jesus? Is it to be like current Christian stereotypes (embodied here by Thomas’ uncle, a grouchy, controlling evangelical preacher)? Or is it to live a life of sacrifice and social justice (personified by the members of the sect, called Leaven)?

The name “leaven” comes from this quote from the Bible:

He told them another parable. “The kingdom of heaven is like leaven that a woman took and hid in three measures of flour, till it was all leavened.” (Matthew 13:33)

He’s talking about the spread of the gospel through out the world… it’s a tiny thing – a grain of yeast – and each tiny, mundane activity we perform aids in its spread throughout the dough… um, world.

It’s mysterious and lovely, this subtle thing… like putting reflections on the gospel in an entertaining work of fiction – a ripping good story with an engaging mystery. I mean, anybody can just flat-out tell you about it… I do it all the time. Todd Wynward, though, has worked it into a delicious loaf of bread.
Posted by julie moore at 2:22 PM