Psychedelic Furriness and the Hope of Heaven

Recently, a college friend and I were having a facebook convo about a pivotal event in our lives: U2 at Kenan Stadium, 1983. It was a show that simply took our breath away…. inspired tears… kneaded our stony, cynical hearts to life… brought depth to our shallow souls… It was a show full of passion and youth and daring and hope and … what I imagine, in retrospect, was the Holy Spirit.

It occurred to me lately that I go to show after show – mostly because my husband buys the tickets, and also because I like shows – but always with a tiny bit of unspoken anticipation in the back of my brain that such a thing could happen again.

It hasn’t yet, of course, but I’m always hoping. That said, sometimes I have to consciously remind myself to judge a show by its own self, not by that one phenomenal experience. And if I’m feeling particularly free, the performance might carry me to some beautiful context … like when I saw Aaron Neville and was amazed by God’s grace.  Or when I felt God’s pleasure while watching Chris Thile go to town on his mandolin…

And last night? Well, I didn’t get slain in the Spirit or anything at the Cat’s Cradle Psychedelic Furs show or anything, but it was pretty fantastic. Remember those guys? Those sort of dreamy, aloof, new wavy dudes that sounded like David Bowie and the Sex Pistols had a baby and it was really into Roxy Music… or something… I really can’t put my finger on it… Anyway, their most famous song was Pretty In Pink,* and if you saw that sweet little John Hughes film from the eighties, then you’ve heard it.

I saw the Furs in Page Auditorium at Duke back when they were new, and I adored their sort of wispy, ethereal handsomeness and droning, atmospheric, saxy, rocky new wave music. I stood right up at the rail in front of the stage because back then you were allowed to do that. 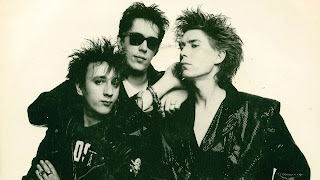 I was close to them… but not nearly as close as I was last night at the Cat’s Cradle! This time I was right up AT the stage – leaning on one of the monitors. I’ve always loved the Cradle as a venue because you can get right up at the music… It makes it less an us/them situation between the audience and performers, and more of a “just us,” meaning – ALL of us.

And I gotta say, my notion of the Psychedelic Furs as ethereal beings completely dissolved … Rather than being aloof, well… it was as if they couldn’t get close enough to us… Both (singer) Richard Butler and his brother, bass player Tim Butler, had a way of leaning waaaay out into the audience… looking right at people… Sometimes they were leaning out past where I was standing!

My husband, Tom, says it’s because they’re working the crowd – that they know that they need to do that to draw in the people at the back of the venue… to address the whole long, narrow room that is the Cat's Cradle. But you know how my mind works… you know I thought of God.

Of course, I’m not saying they’re God, I’m just saying this aspect of their performance made me think about how God craves our presence. Say he’s the one making the music... and we’re appreciating it with our worship and lives…  But He doesn’t just stay up there on stage with bouncers and barricades all around and all; He leans right into the thick of His fans. Clasping their hands, posing for cameras… as He sings to them.

It helps this analogy that the guys in the Furs look both young and old…. Eternal as it were. I mean, they’re slim and still have their own hair – styled in a similar fashion to their highwire days… but their faces are lined and they seem wiser and care-ful, and a bit less pretentious. In fact, I’d say they performed the show with a great deal of joy and love… like a big musical, artsy-fartsy hug. Richard periodically does his snake dance, but it’s more of a wink and a nod to his image than an artistic statement.

So ... is this a show review or just a peek into the crazy workings of a crazy brain… the brain of a 51-year-old woman who might still rush the stage at shows, all the while yearning for the big stage rush in the sky…?

Well, some of each. Here’s the show review part: How was the music? Still the same driving, yet atmospheric mix… Songs like Love My Way and Ghost in You are dreamy, and songs like Mr. Jones are a forceful drone strike with a Dylanesque barrage of cynical lyrics (guess that’s why it’s called “Mr.Jones.”) But mostly, it was rock and roll. Rock and roll in an elegant, but surprising friendly package.

One of their great songs is called Heaven,* and I really felt it… Being reminded of a God who destroys the buffer between us and Him is a gift… and honestly, for a short while I was young again. Like the wide-eyed co-ed who saw U2 and was gripped by their ringing guitars and their passion.

I was trying to find the place in the Bible where Paul talks about how we’re going to get new bodies in heaven, and while it’s not the one I was looking for, this whole paragraph in 2 Corinthians really rang my bell:

For we know that if the earthly tent we live in is destroyed, we have a building from God, an eternal house in heaven, not built by human hands. Meanwhile we groan, longing to be clothed instead with our heavenly dwelling, because when we are clothed, we will not be found naked.  For while we are in this tent, we groan and are burdened, because we do not wish to be unclothed but to be clothed instead with our heavenly dwelling, so that what is mortal may be swallowed up by life. Now the one who has fashioned us for this very purpose is God, who has given us the Spirit as a deposit, guaranteeing what is to come. (2 Corinthians 5:1-5)

See? It’s lovely because it’s about being tired in our own bodies and longing for the new top notch bods we’ll get in heaven, and how the whispers and the roars of the Holy Spirit (the unfading Ghost in you, if you will) that we get sometimes is like God saying, “Just you wait…!”

Once I was in church singing along, but feeling kind of sorry for myself, and I distinctly felt like God was pressing this thought into my mind, “You just wait and see what I’m gon’ do.” (Yes, in my mind, God talks like an old Southern guy.)

I love that… of course, I’m always looking out to see what He’ll do, and when I’m alert enough to notice, it’s stunning.