I spit out like a sewer hole, yet still receive Your kiss 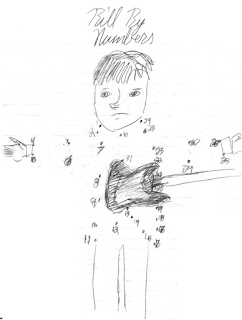 If you keep up with me on Facebook you know that my 11-year-old son and I are huuuuuuuge fans of The Who. In fact, Bill recently drew this awesome pic of himself as an homage to the cover of the Who by Numbers album. Anyway, when we drive around town, just the two of us, we play every Who album we own on a systematic rotation for our in-car listening pleasure.

And as I remarked earlier, hearing the songs repeatedly causes me to give them more than the passing thought I usually give to classic rock songs – the arrangements, the words and their possible meanings... these songs I've heard a thousand or more times... I may already even THINK I know what they mean, but... There's always some new flower of knowing that might bloom in this loamy brain of mine.

For instance, Pete’s hard rock rant, Who Are You... I’ve heard this song a GAZILLION times…  but I JUST realized that it’s a song that ANSWERS ITS OWN QUESTION!! Go ahead, click here and listen to it again… and listen to the WHOLE THING. In the first two verses, you’ll hear Roger Daltrey pretty much spitting out this tale of a night in the life of an angry, lost man….

followed by the completely singable chorus which asks the song’s primary question:

Then our angry, lost man goes home and takes a moment to reflect…

I stretched back and I hiccupped
And looked back on my busy day
Eleven hours in the Tin Pan
God, there's got to be another way

and asks himself again:

First of all, what a great description of a drunken, raging night! I should know – I’ve had one or two…(not lately of course!) I mean, can’t you just see lanky late-seventies Pete going through this ordeal in lurid, dimly-lit London locales. (SO MUCH ALLITERATION!!!) And knowing that these lines refer to a specific night in Pete Townsend’s life makes me feel like I have important esoteric knowledge. 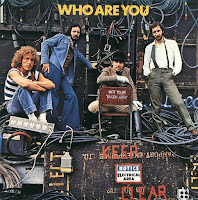 There’s a long blow-by-blow recount in Dave Marsh’s book, Before I Get Old; I’ll try to condense it here: So it’s the late seventies and punk rock is raging against the bloated excess of mainstream rock music machine and Pete and the boys are feeling the burn of it…  even though The Who may actually have invented punk rock with all their rebellion and instrument smashing, and telling the whole of the older generation to “f-f-f-fade away,” they took punk rock’s raging personally.

Anyhoo, one night after a long day of business meetings – one of which involved the transfer of a sizable check, Pete goes into a pub and is none too sober when he spots a couple of actual Sex Pistols. He then rants and raves at them about the state of rock and roll – the stuff that’s bothering him about the whole life he’s living.

But these guys, they love Pete and the Who and they tell him so. But he’s not having it. He knows he embodies a lot of what they think is wrong with the music business. Then he leaves and falls asleep slumped down in a doorway until a policeman wakes him up BY NAME and sends him home to his wife (aka - The Rollin’ Pin).

So in the these verses he’s basically questioning the his own identity: “WHO ARE YOU??” he asks himself. “Everyone thinks I’m awesome, but aren’t I just a hack? Here’s the check to prove it!” and “The policeman knows my name, but do I know my own self?”

These are the familiar verses, but it’s the third verse that has just now sunk in. I was thinking how nice it sounded. I posted the lines on Facebook, because I love using song lyrics as status updates. Makes me feel all poetic, you know – without having to actually write anything. Anyway, it goes like this:

I spit out like a sewer hole
Yet still receive your kiss
How can I measure up to anyone now
After such a love as this?

And this cool guy I knew in college, Artie Sparrow (That’s his real name! Isn’t it lovely?), left this comment: “Fun fact: that lyric is about Myrtle Beach.” Of course it is. At first I thought Artie was joking because… well, you know… Myrtle Beach? The Redneck Riviera? But then I remembered that there is a Meher Baba center at Myrtle Beach, and Pete Townshend loves him some Meher Baba, and his bio Who I Am explains that this refers to a visit there.*

MB is his GURU... although I’m not sure what that means. I honestly can’t say I would equate Meher Baba with the Divine – but Pete does. So… when Pete says, “There’s got to be another way,” in verse 2, and then moves on to the beautiful, meaningful ponder that is verse 3 – that what he means, it is the love of the Divine that defines us – not whether we’ve invented punk rock, whether we’re are-nows or has-beens… (Jew or Greek, man or woman, slave or free…**) Who are you? Who am I? Who is GOD? Who does God say I am? If we ask these last two questions, we will know the answers to the first two questions.

It’s just like when Pete says in the gorgeous song Bargain – “I sit lookin’ ‘round, I look at my face in the mirror.*** I know I’m worth nothing without you. And like one and one don’t make two, one and one make one. And I’m lookin’ for that free ride to me - I’m looking for You!” (creative capitalization mine!)

And Pete wrote this one several years before he struggled with these issues in Who Are You. Which goes to show, that we KNOW things to be true, but that doesn’t mean we don’t struggle with opposing FEELINGS. I’m pretty sure I don’t have to tell you this. Like when you KNOW that finishing off your kid’s fries after you’ve had your own just might not be the best thing for you, but you really have to struggle with the truth of it because dang it FRIES ARE DELICIOUS!! Heck, even St. Paul struggled with the difference between knowing and feeling! Check out Romans 8:21-25!

Of course matters of identity are a bit more serious than consuming mass quantities of fries… But we see from the letters of Paul that his recipients need to be repeatedly reminded of the fundamental sweetness and glory of the gospel – that is, that God loves people so much He sent his own Son to save them.**** And that’s WHO WE ARE. People God loves and deems worth saving.

*I can talk more about this if you really want to know, but this post is already so long…!!

***When we come to this line from Bargain in the car Bill and I both gaze wistfully into the rear view mirror. It cracks us up every time. If you want to read more of my crazy reflections about this song, you can read this post.

Email ThisBlogThis!Share to TwitterShare to FacebookShare to Pinterest
Labels: Bargain, Identity, Myrtle Beach, Self-Esteem, The Sex Pistols, The Who, Who Are You