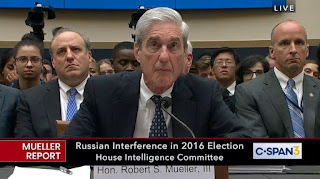 Okay, so I’m sitting here watching the Mueller testimony and it’s just making me kind of mad… I mean, I’m already mad, as stated previously, but now I’m mad at more people! I guess I should have said I am LISTENING to it, rather than watching it, as I have the screen minimized, so the thing about that is, I can’t see what party each questioner belongs to… until they start talking...!

Because you can tell from what they ask and how they ask it. That is to say, the Democrats read the guy’s report as an indictment of the president, and the Republicans read it as an exoneration… and each examiner has been questioning accordingly, seeking to pull out of Mueller validation of their own stance. One guy even kind of yelled at him for “perpetuating injustice.” These folks are supposed to be QUESTIONING Robert Mueller, but I don’t see any evidence that any of them care about the answers. No one is listening, are they?

I see a huge amount of the same kind of thing on social media… We post snarky status updates, share articles and pointed memes… But you know what we don’t do? Listen. Of course I can’t see what everyone’s doing when they see a political post… are they reading it and pausing to absorb it, researching the claims, validating the source, comparing it with things that they know to be true? Somehow I doubt it. I know I’m not. Not very often anyway.

Well, I don’t post or comment much about politics, but I read some of the posts. And rather than pausing to consider each assertion, I’m more apt to blindly click “like” when a post confirms my prejudices or mutter “kook” when it doesn’t… That’s why, when I heard the song, Listen by Jim Lauderdale, I was cut to the bone. Click here to watch the video – check out his Tai Chi movies!

“You don’t know everything,” he tells me… “You don’t know lots of things.” Well, you may beg to differ, but I don’t really consider myself a pompous windbag. Nonetheless, I need to take in the basic ideas that Jim is putting out there:

If you believe you're always right / You’re wrong, and that's an oversight / Nobody's right that much of the time / If you've got all the answers, who's asking all the questions? / No one can get a word in edgewise

I wonder who Jim was thinking about when he wrote this? Maybe he was watching a congressional hearing… or maybe he was on Facebook! He might have even been in church! In many venues, I see a serious lack of humility—on both sides.

Maybe the humble folks just aren’t speaking up…? I guess this post isn’t for them… The hilarious thing is that when I first heard the song, I thought, “So-and-so really needs to hear this.” Haha! Physician heal thyself!!

Anyway, I just wanted to put this song out in the blogosphere because it makes a fair point for our times… LISTEN, y’all.