Is it too late to write about Pulp Fiction, y'all? 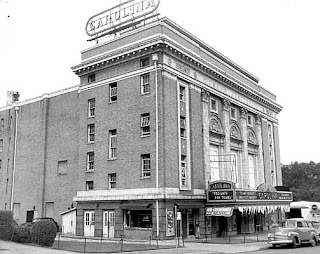 So… summer, movies… The sweaty gloopiness of your typical North Carolina in summertime is easily defeated by a two-hour refrigeration period in the chilly darkness of a movie theater… Especially when it's a gorgeous historic venue like downtown Durham's Carolina Theater. 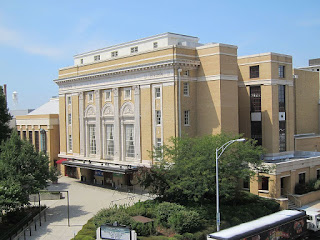 Built in 1926, it's been beautifully renovated, but retains the grandeur of … you know… a movie palace from another time! They show current films—leaning more toward foreign and artsy films—but we come for the special stuff... older films, campy films, action films, horror, noir…  My friend Todd is also there sometimes, so that’s a nice bonus… And it’s fun to introduce our budding filmmaker Bill, to learn about the classic genres. Most recently we took in the super-hip, insanely funny, 1994 crime movie Pulp Fiction.

Is this movie appropriate for a 15-year-old? Probably not. And I do feel guilty about taking mine… on the other hand, amidst all the drug use, violence, and foul language… well, it really is a morality tale, isn’t it? Maybe all this stuff has been said before regarding this crazy masterpiece, but I’m going to give you my thoughts anyway.

If, after all these years, you haven’t seen it, well... I’m actually not able to give you a plot synopsis. Sorry. It boasts a fractured timeline, and I really don’t think I could give it justice. It’s about two well-dressed criminals just doing their day-to-day crime stuff, and also about a boxer who is supposed to take a fall, but doesn’t, and also about the criminals’ boss. And the bosses’ wife. And the boxer’s wife… and a dealer and his wife… And these two other criminals. See? It’s just too complicated! I can’t do it!! 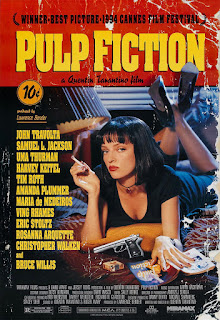 Anyway, throughout the film, the characters are confronted with choices… one man must decide to behave honorably toward his boss’s wife. Another man makes a choice to rescue a man who has been trying to kill him… a choice that works out for him, but, honestly, could have gone either way… I guess it is the nature of morality tales to highlight good and evil, which as humans we must choose between every day–just in smaller, less gory ways.

At the center of the film are two criminals—Jules and Vincent—and their choices. Both have chosen the criminal lifestyle, and carry out their daily duties as a matter of course. But one day something happens—a guy empties a large pistol point blank at them, but misses them entirely. “God came down from heaven, and stopped these ************ bullets,” Jules (Samuel L. Jackson) says. Vincent (John Travolta) considers it a fluke, and goes about his business, but to Jules, it’s a turning point.

Jules: We should be f***in' dead, my friend! What happened here was a miracle, and I want you to f***ing acknowledge it!

Vincent Vega: All right, it was a miracle. Can we go now?

Yeah, Vincent doesn’t care… the moment of divine intervention rolls right by him. That night, when he chooses NOT to act inappropriately with the boss’s wife, it is not out of respect for the divine. It is merely self preservation—as we know, from an earlier discussion of a rumor that the boss had thrown a man out of a window for messing with his wife.*

On the other hand, Jules considers their near miss an act of God—proof that God is paying attention and cares about his choices…? Jules takes it as a sign that he should change his course. Maybe Jules was set up for this… Maybe a guy who likes to quote Ezekiel 25:17** before “popping a cap” in someone’s ass is already thinking about God. Here’s a pretty hefty quote from Jules that explains the whole thing:

“The path of the righteous man is beset on all sides by the inequities of the selfish and the tyranny of evil men. Blessed is he who, in the name of charity and good will, shepherds the weak through the valley of the darkness. For he is truly his brother's keeper and the finder of lost children. And I will strike down upon thee with great vengeance and furious anger those who attempt to poison and destroy my brothers. And you will know I am the Lord when I lay my vengeance upon you."

I been sayin' that sh*t for years. And if you ever heard it, it meant your ass. I never really questioned what it meant. I thought it was just a cold-blooded thing to say to a mother****er before you popped a cap in his ass. But I saw some sh*t this mornin' made me think twice. Now I'm thinkin': it could mean you're the evil man. And I'm the righteous man. And Mr. .45 here, he's the shepherd protecting my righteous ass in the valley of darkness. Or it could be you're the righteous man and I'm the shepherd and it's the world that's evil and selfish. I'd like that. But that sh*t ain't the truth. The truth is you're the weak. And I'm the tyranny of evil men. But I'm tryin, Ringo. I'm tryin' real hard to be the shepherd.”

See, Jules is aware of God, has His word in His head, so … when he experiences what he perceives to be a miracle, he knows exactly where to look… and suddenly the sheer … relevance of God’s words causes him to consider what they mean for HIM personally - where HE fits in God’s design. Until now, he has taken on the role of God as the dispenser of justice, but now, he’s not too sure…

So that later, when a couple of petty thieves try to rob him, he comes out with this: “Normally, both your asses would be dead as f***ing fried chicken, but you happen to pull this sh*t while I'm in a transitional period so I don't wanna kill you, I wanna help you.”

In a morality tale, there is normally a clear demarcation of good and bad—although it’s a little skewed here. Jules and Vincent’s behavior is violent and capricious, and their conversation is vulgar, but they are goofy, and they say hilarious things and they are so handsome in their suits... so we somehow feel sympathy for them. It’s a good reminder that good and evil are not always so easily recognized. 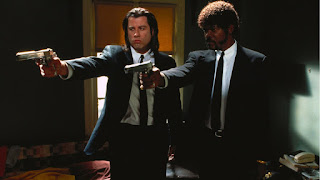 In this story, both men are criminals, but good and evil are defined by the choice each man makes when he confronted with the Divine. And, like in wisdom literature, where the good are rewarded and the bad are punished, each man receives his due. Well, we don’t really know what happened to Jules in the end, but we do get to see Vincent gunned down in spectacular fashion… and Jules isn’t with him.

It all reminds me of the story of two thieves on the crosses beside Jesus:

Now one of the criminals hanging there reviled Jesus, saying, "Are you not the Messiah? Save yourself and us." The other, however, rebuking him, said in reply, "Have you no fear of God, for you are subject to the same condemnation? And indeed, we have been condemned justly, for the sentence we received corresponds to our crimes, but this man has done nothing criminal." Then he said, "Jesus, remember me when you come into your kingdom." He replied to him, "Amen I say to you today you will be with me in Paradise." (Luke 23:39-43)

I may not be a thief, and I may not have ever shot a guy just for looking at me wrong... but I have done plenty of crappy things... so this is a great message for me. It’s really good to know that, God wants us to be with Him in paradise… and has made a way for us to get there!

*There is a point in the film, where, after Vincent does something particularly careless and vile, he says: "Jules, did you ever hear the philosophy that once a man admits that he's wrong that he is immediately forgiven for all wrongdoings? Have you ever heard that?" So, he can't acknowledge God... but wants to be forgiven? I guess that's normal... we want grace, but we don't want God to be in our business too much...