Happy Birthday to Me! 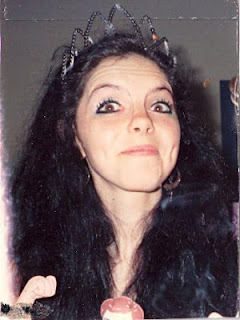 I keep thinking I should write a special blog post for my birthday – even though it’s not one of the big ones… like last year. Maybe it’s odd that a grown woman would care about marking the day of her earthly debut, but… I guess I see it partly as a time to celebrate another year of defying death...

Yes, I’m gonna be 51… and I have a son who just turned nine. Just for the heck of it, I put him on the scales to see how far he’s come. Granted, he’s just busted through the mother of all growth spurts, but this child… this NINE YEAR OLD child, weighs 82 pounds. He is tall and well-formed, solid muscle and bone … I am definitely not saying that I think he weighs too much. In fact, he’s just right. My point is that …well, he weighs more than I did in my twenties.

Yeah… I was scrawny. And sick. And sad. But now… well, I’m plump! And well! And happy ! And ALIVE!!! So why NOT celebrate?! Why NOT eat cake?! Why NOT have a splendid diner at the fantastic, Southern Living-hailed Geer Street Garden?!

What’s weird is that this crazy body and brain of mine contain two opposing forces: the first one being the LET’S ROLL! me… the me who is ready for anything – let’s love the mess out of these people God gave me, and design the hell out of these ads and magazines, and write this crazy blog with all kinds of weird references, and lightly steam the crap out of these delicious vegetables from the farmshare, and dig art and music and movies and church, and tell everybody about Jesus… That’s probably the one you’re seeing when you look at me. And it really IS me.

But then there is this other me…  the ready-to-meet-Jesus me. The worn out, tired, plodding, just-get-it-over-with me. That’s me, too. I AM a Gemini (ie. twins), after all. Not that I follow the zodiac – that’s supposed to be demonic or something, isn’t it?

It’s pretty helpful when I think about this to realize that Paul had these same warring factions in him. Here’s what he said: "If I am to go on living in the body, this will mean fruitful labor for me. Yet what shall I choose? I do not know! I am torn between the two: I desire to depart and be with Christ, which is better by far; but it is more necessary for you that I remain in the body." (Philippians 1:22-24)

Now, I am in NO WAY comparing myself to a spiritual giant like Paul… But I DO kinda know what he meant. It’s not a weird death wish or a suicidal tendency or anything… I think he was just tired. He endured all kinds of trials – whipping and imprisonment and shipwreck and snakebite… It makes my little "trials" look like a hangnail.

But Paul... I don’t think he was looking for a way out – he’d already emptied himself and given himself to Jesus… I just think his whole life had been pointing to this end and he was ready for it. And he was so sure of Jesus waiting there for him that he could freely say, “Kill me now.” I imagine he felt like a marathon runner craving the finish line and his trainer's arms to collapse into.

And because he was so sure of Jesus, he was also able to keep on running – he plowed ahead with what he was doing here on earth. He knew he wasn’t done, and he loved all those people so much... He had to keep on keeping on… to PREACH TO HECK OUT OF THE GOSPEL, SAVE A GAZILLION SOULS, MAKE A BUNCH OF TENTS, AND PRAY SOME SUPER FERVENT PRAYERS, AND HAVE SOME EXHAUSTING VISIONS, AND PLANT A BUNCH OF CHURCHES ALL ACROSS THE KNOWN WORLD, AND WRITE A BUNCH OF HELFUL LETTERS, AND MEDIATE SOME DISPUTES AND MENTOR SOME YOUNGER PASTORS… It was a hard life, but a good one.

Life IS good – and I'm going to celebrate another year of mine. Death is good, too, but I’m not ready. And either way, it’s all for Jesus.
Posted by julie moore at 4:11 PM