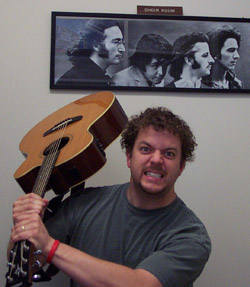 True confession: I love Nat Stine. He is the "Worship and Music Minister" at my church, and I love him. Not in any romantic or adulterous kind of way. And not in a creepy, stalky way, although maybe he'd beg to differ... I just like what he does on Sunday mornings - the songs he chooses, his arrangements, the laid-back way he is.

I went to church this morning thinking, "I'm going to write about Nat today," and in between songs, he actually went into sort of an explanation of his method of choosing diverse kinds of music because God's people are a diverse group. On any given Sunday, we might hear any combination of the following: hymns, contemporary Christian music, gospel music, secular music, choral music, classical music, songs in different languages... I probably left some things out, but that's how diverse it is - I just can't name them all.

Sometimes we have a choir, sometimes a band. Sometimes we have a local musician or band like Thad Cockrell or Roman Candle. Sometimes it's folky and acoustic, sometimes rockin'. The arrangements are always good - good harmonies, good instrumental blends. And best of all, for me, is that no matter what kind of music is being played, it NEVER sounds nerdy.

Because that has always been my beef about what they call contemporary Christian music. It just sounds flat-out nerdy. I admit that I never listen to it, so maybe it's changed since the 1980s when I first gave it a shot... but back then, it was like fingernails on a chalkboard to me. I appreciate the sentiments, the theology and all... some of the songs are actually wonderful. But the arrangements just made me shut down. I am not sure why... lack of powerful drumming? too overproduced? just that it seemed to be an imitation of something, not the real thing?

I get a much better buzz off other kinds of music... I've been know to do the praise hands thing at a Husker Dü show or Bruce Springsteen concert (much to the embarrassment of my husband), or driving down the road listening to Soul Asylum or Van Morrison. Not because I'm worshipping Bob Mould, Bruce, Van or Dave Pirner... but because sometimes it just feels like God is right there with me when I am hearing this fantastic music. Did you know that if you listen to Van Morrison's Moondance album from beginning to end, you get a great Christian story? From the baptism at the beginning (It Stoned Me) to the apocalypse at the end (Glad Tidings).

I'm really not trying to make myself sound cool. Anyone that knew me in high school - or knows me now - knows that I am about as nerdy as they come. And I love churchy stuff and all that - even though i'm not precisely cut out of that mold. I'm more of a very lumpy drop cookie.

But I digress. I was talking about Nat. I really don't know him all that well - he's a lot younger than me, and has a fascination with Boston sports teams that I don't get. Nonetheless, he and his friends make music at church that I can get on board with... and today he said spoke a true word: even though I'm on board with it, the music at church is not really FOR me - it's for all of us, and look how crazy different we are!
Posted by julie moore at 3:30 PM