Till I Reach the Higher Ground 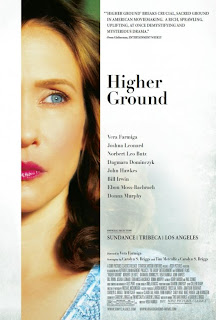 We had another sobfest here at the Moore home theatre the other night...! We don’t really have a “home theatre” – but wouldn’t that be cool? No, we just have a reasonably large television and a couch and an armchair. (The couch is “Archie’s” chair and the armchair is for “Edith.”) Anyway, the movie was called, Higher Ground, and it just tore me up. It was based on a woman’s memoir, so knowing that it happened to someone makes it all the more gripping...

I could give you a detailed recap of the movie’s plot, but I really don’t think I am up to the task. Instead I will tell you what the movie was actually about. It’s about a woman, Corinne, who is saved as a young girl following a family trauma, then, with her husband, becomes intensely involved in a heartbreakingly earnest, loving, albeit conservative, church. Yet... despite being deeply embedded in a life of external worship never “feels” God’s presence.

We see her longing and frustration most intensely in a scene where she begs the Holy Spirit to descend upon her and give her the gift of tongues, a secret prayer language. And when her closest friend suffers a debilitating brain tumor, Corinne’s pain and exasperation are intensified.

It was hard to watch for a couple of reasons, the first being, that I envied her a bit for having a husband who was so openly all in for the Lord – he played guitar in church, was an elder and taught their children about God with gusto. I love my husband ferociously, but his mode of worship is not like mine at all. While we both grew up in mainline churches – his a “high” Presbyterian, mine a Methodist, I embraced a much more charismatic style after entering my “born again” life. His is a more subdued, private, inward way... playing his cards much closer to his chest.

But that was just a minor thing. No, I felt so bad for Corinne, and her desire to feel God’s presence, to FEEL saved. Of course, she was in a church that emphasized these things. Would she have had the same crushing depression if she had been in a high Episcopal Church? I don’t know.

I, also, have desired a more charismatic, Spirit-filled experience. Speaking in tongues eludes me as well, though I have asked God for it. But despite not receiving this particular gift, I have felt His presence in other ways – even sometimes when I didn’t want to!

I used to debate the validity of Christianity with me every time we got together. She often wondered how she could cast her lot with Jesus when she just didn’t feel it. I think she envied me my emotional conversion. She wanted to know why Jesus didn’t assault her heart the same way He assaulted mine. I just didn’t know what to tell her. I longed for her to be sucked into the Lord’s vortex of love and grace, but as long as I knew her, she continued to hover around the edges just sort of poking at it. I lost touch with her a few years before she died and I have always prayed that she eventually took the plunge.

Neither would I know what to tell Corinne, should I meet her. Except that God is present whether you feel Him or not. He is true whether you believe Him to be or not. He is amazing and Lord of all, whether or not you feel this to be true. He is not relative. He is absolute. On the other hand, God is LOVE, which is an emotion, so... isn’t feeling kind of important? Or is God’s love something different altogether? Like maybe it involves emotion but that’s only a small part of it... there’s also justice and mercy and all the other attributes of God... I don’t know. I’m just speculating.

Of course telling someone this is probably just words. It’s not like they will just say, “Oh, you’re right. How silly of me.” I did love Corinne’s resolve at the end. I don’t have the actual verbiage, but she said something like, “I’m going to keep on wrestling God until He blesses me.” Other than this, the conclusion is left to the viewer to draw, but I like to think that Corinne is still holding on to her God for dear life, and that she will be blessed.

(Although they have very little to do with anything, I couldn’t resist posting a couple of songs: The Red Hot Chili Peppers singing Stevie Wonder’s Higher Ground, and Claire Holley doing a quite different Higher Ground.