Who hasn’t wanted to kill Bono at least once in their life? Don’t get me wrong... I absolutely adore the man, his voice, his songs, his humanitarian work... I have loved U2 since early in their game. I still love U2. But something about Bono just invites ... scorn? or something? So who hasn’t looked at the smirky face in all its sunglasses-ed self-righteous handsomeness and at least wanted to pop a cap in his finely formed derriere?

The reason I bring it up is that I just watched a fantastic movie called, Killing Bono. It has EVERYTHING I love. Boys. Bands. Groovy 80s clothes. (I love a period piece, and the 80s - well, that was my period! I know the guys in the film look hilarious in their Duran Duran/Thompson Twins-esque garb, but I still think they look fantastic!) Humor. Pathos. “History.” Ireland. London. Gangsters. Meaning. 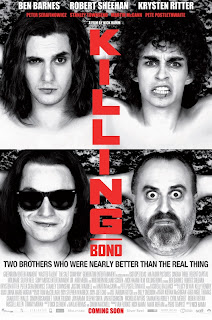 Killing Bono is the vaguely true story of two brothers who started a band that formed in Dublin around the same time that U2 was formed. And while their school friends U2 rose to stardom, superstardom, and beyond, the McCormick brothers struggled to trample their own path to the stars.
Living at poverty level in a cavernous furniture-bare warehouse of an apartment in London, the McCormick brothers bang out their weary tunes and pound the pavement in search of the fame and fortune that their friends Adam, Larry, the Edge and, yes, Bono, have taken hold of already... in a big way. Everywhere they go the brothers are backdropped by posters and billboards heralding Ireland’s favorite sons. Every time a new album is released a new backdrop is erected – all over Dublin, and London as well.
It is humorous, but also heartbreaking to watch as Neil and Ivan McCormick work so hard, yet have fate – and their own pride and stubbornness – steal any chance they may have had to join their schoolmates in stardom... or even moderate success. Fate plays a hand in a couple of instances when scheduled “big break” shows are preempted by 1. a visit to Dublin by the Pope, and 2. Bob Geldoff’s historic, bi-continental Live Aid concert.
Mainly I just wanted to slap Neil, as he makes poor decision after poor decision, the first and most giant being that in the very beginning Bono asks him to let his brother Ivan be in U2... and Neil says... NO. Then he never tells Ivan about it! So the following years feature Neil scurrying about working his tail off trying to bring Ivan the success he might have had.

And yet... despite his determination to succeed, Neil makes more and more poor decisions – borrowing money from a local gangster, sleeping with the record producer’s wife... Often his bad choices involved offers for a leg up from U2. He won’t let U2 help them get a recording contract, and he turns down the offer of an opening spot at U2’s Dublin tour date. Because he wants their band, now called “Shook Up!” to do it on their own. A noble sentiment, to be sure. Or maybe it was just flat out PRIDE... But the music business is a crazy cut-throat arena with bloodthirsty gladiators all fighting for their lives... So maybe a little help would have been nice... which actually reminds me of a song by U2 called Sometimes You Can’t Make It On Your Own.

But I guess pride and shooting ourselves in the foot is pretty much the human condition. Read the Bible and you will see the people in it - even heroes like Kings David and Solomon – sabotaging themselves at every turn. Our church is studying the book of Judges... which I am starting to think of as the book of poor judgment. “Everyone did what was right in his own eyes,” it says. I’m pretty sure I must do this all the time too, being human and all...


As I ruminated further on the movie, I started to think about how most of the guys in U2 are Christians, and then I was reminded of that proverb about the guy stuck on his roof in a flood. He prays and prays for help from God, and while he is sitting there, a guy in a raft rows by and offers to help him... but the guy says, “Nah. God’s going to help me.” Same thing happens with a canoe and a helicopter. So the guy drowns in the flood and goes to heaven. When he encounters God he asks him, “God, why didn’t you help me?” and God sez, “I sent you a raft, a canoe and a helicopter... what more did you expect?”

You see, God doesn’t always do things in the way that we expect. And maybe His invitations don’t always look like we think they will. Of course, if God’s invitation looked like Bono, I would have been there much sooner. But I guess that is the point. It doesn’t usually look like a gorgeous, passionate, swaggering, long-haired, throaty-singing Irishman with charisma to burn... although in this case it actually did!
So how do we recognize God’s help? How do we not just completely miss Him? I don’t know... I am kind of lazy, so if someone offers to help me I always say yes... The danger for me is that I would accept help that is NOT from God. So again, how do we know? I guess it would involve being close to Him so that we recognize how He does things... Sometimes, though, in my experience what God is and isn’t doing isn’t obvious until after the whole thing is over. Because, yes, God moves in mysterious ways. Just like Bono says in the song.
Posted by julie moore at 2:56 PM