"Pride goes before destruction, a haughty spirit before a fall." (Proverbs 16:18)

Don’t I know it...! Here’s my story: this morning, I’m kinda riding high from writing what I thought was a not too bad blog entry yesterday... I mean, I got several positive responses from several readers on it... which I love. A lot of times I write something and it just sort of hangs there. And no matter how I feel about it, it’s really good to get feedback... to know that someone – anyone – out there is getting it. It’s great to be “gotten.”

Anyway, yesterday, I got some of that. And I was feeling good. But instead of thinking, “God did this!” – frankly, I was in danger of getting kind of a big head. So I’m at Harris Teeter buying rapid rise yeast to make bread in the awesome breadmaker I got for Christmas... (and now that I think about it, it’s a miracle my head fit through those sliding glass doors!) and it happens to be Thursday, which is Senior Discount Day (for customers 60 and over,) if I understand correctly... And I’m just minding my own business, making my transaction, when the cashier says, “Do you qualify for a Senior Discount?”

Needless to say, I was wounded to the core... I mean, I’m barely used to not being carded when I buy alcohol! In fact, I got carded at the Ingles on Tunnel Road in Asheville on my 39th birthday! Anyway, on my way out to the car, I dialed my friend Grace and went “WAAAHHH!!” right into the phone after she said “Hello.”

And over the phone, as I sat in the car in the parking lot, Grace talked me down off the ledge by telling me how a former boss of hers, a very sensible Christian man, said he thought that sometimes God threw him curve balls like that to keep him from getting a big head. And that certainly was a pin to my big balloon of a head! *POP!*

At first I thought, well, that sounds like God is just sitting around thinking up ways to trip us up... and then maybe he’ll do one of those Nelson laughs – “HAH-ha!” What kind of God is that?! But then I thought... that’s a God who really cares about your soul. Because unless you’re talking about pride in a job well done, or that kind of thing, excessive pride is a soul-sucking force. 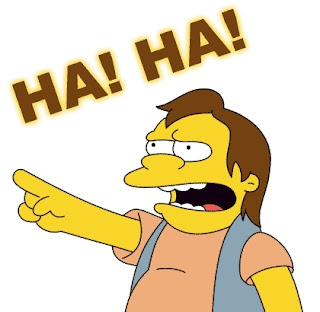 Pride can keep you from looking for God and depending on Him, which is a lonely way to be: “In his pride the wicked man does not seek him; in all his thoughts there is no room for God.” (Psalm 10) And if you’re only looking at and depending on yourself, then what if you fail? What have you got then? NADA, my friend. And pride can cause you to think you’re better than other people... and I don’t know about you, but I know me, and I’m not better than anyone!

While writing to the church in Corinth, St. Paul said that if he wanted to he could brag – that he had a lot to brag about – spiritual experiences and the like, but that “in order to keep me from becoming conceited, I was given a thorn in my flesh, a messenger of Satan, to torment me. Three times I pleaded with the Lord to take it away from me. But he said to me, “My grace is sufficient for you, for my power is made perfect in weakness.” (2 Corinthians 12) To put it plainly, God gave Paul a handicap so he wouldn’t get a big head.. so that he would have to rely on God alone.

So... was someone telling me I look as if I might qualify for a Senior Citizen Discount like Paul’s “messenger of Satan?” Probably not even close. But it wasn’t just that... it showed me that I possess a measure of vanity I didn’t know I had. Yeh... I got no business being prideful... I’ve got a long way to go before I’m perfect. Good thing it’s not all up to me, right?
Posted by julie moore at 8:22 PM