Guaranteed to Blow Your Mind

I would love to sit around and read blogs all day, but I just don’t have that kind of time. There are so many good ones out there, so many people with great insights sharing them in the blogosphere... but I barely have enough time to do what I already need to do... But when a blogger on my Facebook newsfeed posts something that looks interesting, I will check it out.

Recently, Tony Jones, one of the guys who writes about the Emergent Church, posted a link to an entry on his blog that referenced a book I had read, so I just had to visit it. The book was not a Christian classic or scholarly treatise about the church, but a semi-recent work of historical fiction called Wolf Hall. It’s about England during the rule of Henry VIII – also the time of great reformation in the Christian church – and the question it spurred Jones to ask was this:

Could anything be published today that would turn the world upside down the way Martin Luther’s writings did at that time? Jones opinion: no, there are too many ideas circulating around and people are just too jaded, plus there is no single ruling theological perspective to shatter, as there was in those days.

I take his point, but I would also have to say that the gospel itself is pretty shocking and game-changing. I’m thinking that was the power behind Martin Luther’s world upset. He re-presented the gospel of grace to a church that had veered off course.

I don’t think the gospel has lost its power to astonish and transform. I think it’s us. Many of us have heard it all again and again. We’ve been to church, we’ve heard the preaching, we’ve sung the songs... but our minds aren’t on it, our hearts aren’t in it. Others might hear it, but see us and think, “No thanks.”

Actually I think that if any one of us could actually grasp the fullness of the gospel of grace, our heads would probably explode. And our hearts. It would alter us irrevocably every single time we considered it. And I’m talking about people who already follow Jesus, as well as those who have yet to meet Him. We’d have to hide in a crack and look at the back of it as it went by, like Moses did. (Exodus 33) We can’t look at it full on, and we can’t really wrap our heads around it. Peter said that even angels longed to look into these things (1 Peter 1) 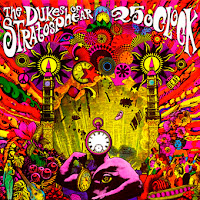 And since my mental and soul grasp of God’s grace through Jesus is just a whisper in a whirlwind, that leaves a great deal of room for expansion. It is for this reason that I seek to learn it through every means possible – both conventional and un-. Books, movies, music, stories of all kinds... And every new drop of truth I see serves to revolutionize my shallow heart. If I let it.

It won’t always be like this. One fine day, we’ll meet the gospel full on when we meet its Author. And like Paul said: “Now we see but a poor reflection as in a mirror; then we shall see face to face. Now I know in part; then I shall know fully, even as I am fully known.” That’s what I’M talking about...!

(here's a song by the Dukes of Stratosphere to blow your mind!)
Posted by julie moore at 5:41 PM