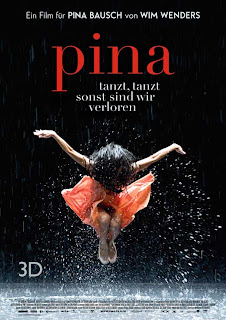 Yesterday Tom and I got some cul-cha. We saw Pina, a film about Pina Bausch, a German dancer/choreographer. And, weirdly enough, it was in 3D! Now, a lot of times, I think 3D doesn’t add a lot to a movie – just makes it look dark. But this is one time that it really boosted the experience... It really showcased dance as the multi-dimensional art that  it is.

I’m not a connoisseur of modern dance – although I did take dance classes when I was younger. I was never that good at it, but I enjoyed the music and the graceful, fluid movement. Not that I was that graceful, but I did try! Anyway, much of the movie showed the dancers in Pina’s dance group performing the routines she had choreographed.

Remember that sketch from Saturday Night Live where Mike Myers played Dieter, host of a German talk show called Sprockets? Well, it kind of reminded me of that. Myers’ sketch parodied German art culture in the 1980s and featured, most notably Germany’s Most Disturbing Home Videos, which showed scenes of old men’s heads spinning around, dying cats, ants, and similar disturbing visions.

The dances they showed were not disturbing or anything, but they were abstract... sort of like... abstract paintings, only with bodies and movement. The impossibly lean, dancers – of many different ages, rarely wore traditional dance clothing. The closest they got to this was the filmy little numbers that looked like nightgowns that the braless women sometimes wore. Other times the female dancers would wear evening gowns or cocktail dresses. The men mostly wore suits or just pants – sometimes with shirts, sometimes without. Wearing street clothes made the dances seem sort of like plays, and sometimes I thought I could get a vague idea of plot – or maybe just theme... but often I would think, “It’s just about the textures.” She would incorporate elements of nature in the dances – dirt, giant boulders, water... or furniture...

One routine involved dancers in a room full of chairs and tables. Some sort of stumbled around with their eyes closed while others struggled to keep the chairs out of their way, or steer them to each other. On one hand it may have been about just the movement... but on the other, I thought it could be about how life is, as we stumble through our world, not even seeing the supernatural forces that are influencing us.

Because we can view life as a blind dance fraught with obstacles, or we can acknowledge that there is a grand design - a choreographer, if you will.

And about the choreographer Pina, well - the dancers had a lot to say about her. The director, Wim Wenders, started making the film when she was still living, shelved it when she died, but then finished it and released it as a tribute. It was clear that the dancers who worked with her were in love with her. They had no problems gushing over her work and her role as a teacher and leader.

She gave vague, but expressive advice like, “You just need to get crazier,” or “Be good.” She also gave the dancers the chance to flesh out her ideas. She’d say something like, “Give me spontaneous, unbridled joy!” and the dancer would show her what he or she thought that looked like using the vocabulary of movement. In this way, her practices were like an improv class. One dancer expressed dismay the she would urge them to keep searching, but never told them what they were looking for or whether they had found it.

I think sometimes life with our Choreographer can feel like this. It can seem vague and unstructured, but believe me this is a good thing. However, sometimes it seems easier to be given the exact steps to take, precise directions to where we are going. I guess that’s why the law was so attractive to people. Outside of the Ten Commandments, the law of Moses gave very specific instructions about things like what fibers to wear, what to do if you have mildew in your house and how much you owed if a neighbor’s donkey fell into a hole in your yard.

In one way, this is difficult - following all those constrictive rules, but in another it is EASY. You don’t have to wrestle with God about what His will is, and how to flesh it out, because it’s all laid out there in black and white. No improvisation necessary. One of the dancers said that there was a time when he was struggling with a lot of things, and Pina told him, “Just make it about LOVE.” (approximate quote) Fortunately, God has a similar rule... One of [the Pharisees], an expert in the law, tested him with this question: “Teacher, which is the greatest commandment in the Law?” Jesus replied: “‘Love the Lord your God with all your heart and with all your soul and with all your mind.’ This is the first and greatest commandment. And the second is like it: ‘Love your neighbor as yourself.’ All the Law and the Prophets hang on these two commandments.” (Matthew 22)

Another dancer from Pina’s group says that all of the dances were about pain and love. Pina was always exploring the questions, “What are we longing for? Where does all this yearning come from?” As I see it, the longing and yearning - that’s the pain. And what we are longing for is LOVE. Where does it come from? The temporary detachment from the Source of love and life. That’s how I dance it, anyway...

In some of the company’s dances, Pina herself would weave in and out among the other dancers, one of whom says that they always felt better when she was with them. I can dig that. Another Saturday Night Live sketch featured Molly Shannon as Helen Madden, a “licensed joyologist” touting her book “Body Joy.” She’d do splits and wave her legs around and say, “ I love it! I love it! I love it!” Well, having my Choreographer with me in my dance ... that's MY body joy!