I’m still here, y’all… I know you thought I’d forsaken you, if you thought of me at all… but of course I haven’t! Although my posts are so far apart nowadays that each one has to sort give you an update on what’s going on with us, right? Well, not much is going on right now - it’s summer, and we live in North Carolina, so we’re hot. (Gee, I’m not sure—is the globe getting warmer? OF COURSE IT IS!! DUH!! Not to get political or anything…)

Anyway, we’ve been seeing a lot of movies, which is one of my favorite things to do. I love the new-fangled theaters with recliners and real food and craft beers, but I also still love a crappy old theatre with no crazy perks, just musty seats and stale popcorn smell… because really, the movie’s the thing! 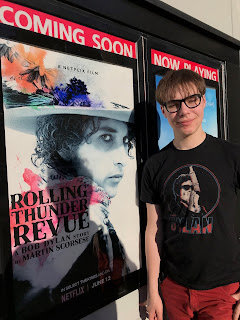 I love sitting in the cool darkness watching a story unfold. I love watching the pretty people on screen, their acting prowess, or lack thereof… I love sizing up the costumes… (Bill says when we watch a bad movie, my comment is always, “I liked the costumes.”) And most of all, I love when something in the film reminds me of God. That’s really what makes a movie a work of art for me.

My theory of art involves the expression of self, but also the conveyance of truth, beauty and … otherness? And Who is more true and beautiful and other than God Himself? And when we create, we do so in imitation of our Creator… God made us in His image, so His creative impulses are in us as well.

Okay, moving right along… In June we saw Rolling Thunder Revue: A Bob Dylan Story by Martin Scorsese. You can easily watch it yourself—it’s on Netflix, but Tom, Bill and I were fortunate to see it in on a big screen at the Rialto in Raleigh. It’s an amazing film… part concert/backstage footage, part “documentary.” That’s in quotes because if you look up the word “liar” in the dictionary, you’d probably see a picture of Bob Dylan! Although… I would say that he’s more of a storyteller than a liar… He’s building a world for us and we’re into it – “Hey Mister Tamborine Man, play a song for me…”

Watching the film, if viewers are not completely hoodwinked, they are left trying to separate the wheat from the chaff—that is, to figure out what they can believe. The filmakers interview (among others) a cinematographer, a congressman, a concert promoter – all of whom are actors telling stories. Heck, one of these folks is an ACTUAL actor – Sharon Stone. They interview Dylan himself, who says enigmatic things like “One thing I can tell you about Ramblin’ Jack: he’s a a better sailor than a singer—he can tie a bowline, a clove hitch, he could tie a rolling hitch—all blindfolded. If you’re ever on a boat or a sailing ship, you would rather have Ramblin’ Jack there as a sailor than a singer.”

That said, another quote directly from Dylan pretty much gives it away: When asked why they wore masks and white-face on the tour, he said, “When somebody’s wearing a mask, uh, he’s gonna tell you the truth. Uh, when he’s not wearing a mask, it’s highly unlikely.” So… the music is what’s true. And… it really is. Watching those stunning performances by incredibly talented musicians dressed in boho 70s duds and masks and whiteface, all I could think was, “Bob Dylan is a BAD ASS!!” It’s filmed pretty close up, and his performance is ferocious… and, to use a quote from one of his own songs, “Every one of them words rang true and glowed like burnin’ coals...” It was all just so gorgeous… I couldn’t look away. 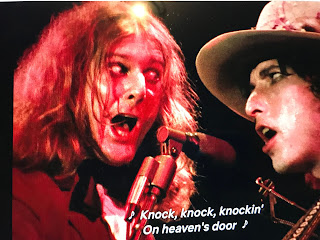 I think that one reason he undertook the carnivalesque tour—playing small venues with a bunch of other people—in an attempt to step away from his massive celebrity… to be "one of the band." Even so, the film shows how other people treat him like a king… like a god. Dylan is not a god, and he knows it! Nevertheless, early on, underlings are told to refrain from constantly asking him what he wants or if he’s okay. “He’s a big man, he knows what he wants.” And later, Joan Baez, tells how she approached craft services dressed as Dylan and experiences the sort of fawning and worship reserved for the man himself. (Of course this may or may not have been a true account!)

Toward the end of the movie, they tell the story of the Ruben Hurricane Carter, the subject of Bob’s song “Hurricane.” Carter was a black boxer wrongly jailed for killing three people. Bob’s song eventually helped to free him, and the two became friends. Bob says that when Hurricane would ask him what he was searching for, he’d say, “Well, Hurricane, I’m searching for the Holy Grail… I’m gonna search until I find it, like Sir Galahad.” And while he was surely like a knight in shining armor to the man who was freed from prison, Bob knows that there is something much bigger to find.

Soon after, the movie draws to a close with Bob and Roger McGuinn put their heads together to sing “Knockin’ on Heaven’s Door” together. It’s… blisteringly intense… they look at each other in a wide-eyed, forceful way that makes you wonder if 1. they’re on drugs or, 2. they're daring each other to knock first… I can’t really say if they’re on drugs… but… I do know that somewhere down the road, each man found Christ… And that’s both truth and beauty to me.