Put Your Arms Around THIS Memory... 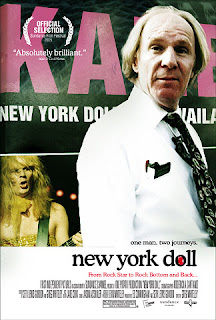 CONTAINS SPOILERS – You may have noticed that I like documentaries... I’ve written about more than one here. Strangely enough, I also love the fantasy genre... fairies and hobbits and whatnot... but really, true stories and real people... well, they’re just brilliant, right?

One of my favorite docs is New York Doll, the story of Arthur “Killer” Kane, one of the founding members of Glam band the New York Dolls. It's full of great music... but it is, and it isn’t, a rock film – a where-are they-now/behind-the-music a la VH1. It has elements of that kind of film, but what it really is... is the story of a man who hit rock bottom, was rescued by God and a religious community, and was granted his dying wish.

To give context, as the movie does, the New York Dolls (David Johansen, Johnny Thunders, Arthur Kane, Billy Murcia and Sylvan Sylvain) were a great band from the early seventies – leading the GLAM charge stateside. Their sound was raw and edgy – a breath of fresh air in the wasteland of 70s AOR. And at that time, they looked... like they were from outer space. They were men, but wore heels and makeup. Of course, this is all very commonplace right now, but when they did it, it was actually probably too soon! They were punk before punk, hair before hair bands and grungy before grunge. If Mick and Keith were the bad boys of rock and roll, David Johansen and Johnny Thunders were the ... well, the really, amazingly bad boys of rock and roll! (On a personal note, I was standing in front of the stage once when Johnny Thunders was playing in a Raleigh club, and was invited at the end of the show to come back and “party” with Johnny...! Thanks, but... no...!)


Lots of great bands claim the Dolls as a major influence and many lesser bands went on to make a large wad of cash imitating them (Poison, Motley Crue and those guys...) As the movie points out, it was a shame that the New York Dolls were unable to stay together and reap the rewards of their innovations. Instead, the band disintegrated from the effects of drugs, alcohol and ... youthful idiocy?

Which leads us to the post-Dolls story of Arthur “Killer” Kane... the band’s bassist. While the other members of the group continued to play in different bands and David Johansen made a name for himself as lounge lizard Buster Poindexter, Arthur, now in L.A., spiraled lower and lower into alcohol and bitterness... until in desperation he called the 800 number in a TV Guide ad for the Mormon church.

And after a what he describes as a "psychedelic" conversion experience, Arthur gave his life over to the church... Now I am not a Mormon and don’t agree with much of their teaching, but they do worship Jesus, so they've got that going for them! And what happened next to Arthur was ... just ... a beautiful story of a community of faith embracing a broken person and finding a place for him. Those people just reached out and took him in and became his family.

This is where we see Arthur taking the hour-and-a-half bus ride across town to work in the church’s family research library; we get to hear from to the little old ladies he works with and the elders who teach and and counsel him... He is a most fervent Mormon, but at the same time, it is obvious that Arthur is not exactly all there... He is extremely bitter about the way his life has turned out and inordinately nostalgic for the past. He talks of little else than reuniting with his former band — even though there was no actual possibility of it happening.

In the DVD extras, the filmmaker says that he had in the back of his mind that Arthur’s story would be a great movie, but was not actively pursuing the idea... when, lo and behold, British pop star Morissey had invited the Dolls to play a festival in London. The movie then follows him to rehearsals in New York, then London. There is a lot of good footage here of the band members interacting. Arthur had built up a fear in his mind of David Johansen, and dreaded meeting him again...

So what did he do? He discussed it with his bishop, who gave him what I think was excellent advice. He said, “Arthur, just be a good Latter Day Saint.” Now, again, I’m not a Latter Day Saint in that way, but “just be a good Christian,” is always appropriate advice. The reunion was touching, and while David Johansen teased him a little about being a Mormon, he seemed more curious than derisive, and Arthur led them in beautiful, humble prayer before the show.

At the festival the Dolls performed a transcendent set for an adoring crowd... In this, the filmmaker pulls all the viewer’s heartstrings... cutting the festival film with old footage of the young Dolls... plus choir music (the Mormon Tabernacle Choir maybe?) to show that this was, without a doubt, the answer to Arthur’s sincere prayers. And Arthur... He is a picture of joy, humility and gratitude... Morrissey noted that he appeared to have been praying throughout the show... and when Bob Geldoff asks him if he will be going back to the library, he says, “They’re expecting me – we’re understaffed.”

And Arthur does return to his old/new life... only to be diagnosed with leukemia and die just a few months later. So that's your spoiler. It's a bittersweet ending, but what stands out to me, is how sweet and personal our great God can be... that God would reach out and perform this extraordinary miracle for just one child of His... That's the kind of God I'm talking about!


Now here's Johnny to play us out: http://www.youtube.com/watch?v=-4pPkeI2N-c
Posted by julie moore at 5:08 PM