Where to now, Saint Peter?

When you are 39 years old and trying to decide whether to get married for the very first time, it can be a pretty tough decision. That was my experience anyway. I was living in Asheville at the time, and working downtown, so nearly every day, I would walk over the the Basilica of St. Lawrence – which is gorgeous, by the way ... you should go see it. Once there, I'd sit in the garden, or slide into one of the pews and just pray my head off. Sometimes I would look at the literature they had in the pew pockets, sometimes I'd just stare off into space. Once I found myself talking to the statue  of St. Peter on the left wall by the main altar. It went something like this, "Peter, you knew Jesus - what would He tell me to do?"

I'm not Catholic, but at that moment, I could see why Catholics find it helpful to discuss things with saints. And I've always been a big fan of Peter... It is obvious that Jesus loved him very much, even though the gospels show him to be pretty much a bumbling idiot. He was always spouting out stuff, speaking too soon... And he could never stand by Jesus at crucial moments.

My friend Grace is a professor, and a truly humble woman. She likes to say that she provides her students with a good model of failure. It sounds funny, but I guess it IS important to learn how to fail. Peter failed spectacularly, but his recoveries were exemplary. 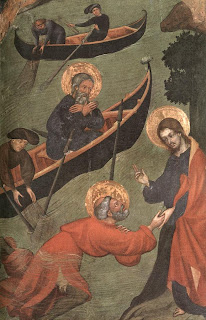 He got the important things right... He recognized Jesus as the Christ (Matthew 16:13-16:20), and knew that there was no place better to be (John 6:68.) But at other times, he kind of spazzed, and Jesus had to kind of reign him in. Like in Matthew 16, where Peter actually rebukes Jesus and Jesus says, "Get thee behind me, Satan!" Or when he swears he'll never disown Jesus... well, we all know how that turns out. Just a short while later he swears three times that he doesn't know Jesus.

It was such a cowardly act, but I sometimes wonder if he just swore he didn't know Jesus because he was afraid they would make him leave. I tend to cut some Biblical figures a bit of slack... Like when it says Nicodemus came to see Jesus at night – people say that it was because he was being secretive, but I wonder if he came at night because he couldn't sleep for thinking about Jesus.

Anyway, I was talking about Peter. He is a complex guy – solid enough for Jesus to build His church on, but shaky enough to run away when things got hairy. BUT what he does next is what counts, I think. He didn't let his shame defeat him – when Jesus appeared to them after His death in John 21, Peter jumped into the water to get to him. I guess he knew his Friend well enough to know that He is all about grace.

Another thing about Peter is that he was a working class guy rather than a scholar, yet he gave stirring speeches that converted thousands, and managed to write two very beautiful letters. How in the world did he do these things? It is my guess that Peter's failures and inadequacies left plenty of room for the Holy Spirit to come in and do what He does best... that which we cannot.